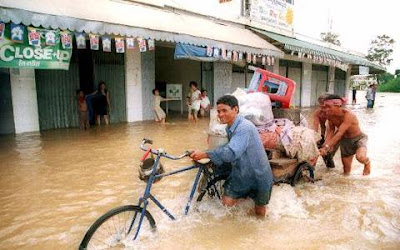 Photo: AP
Since Monday some 13 provinces are facing flooding problems.
A total of four people have died in storms and flooding since Sunday, government officials said Friday, as officials nationwide counted the toll of heavy rain for the week.
A severe storm system battered the coast on Sunday, while continued rain flooded streets and fields nationwide. Authorities in several provinces have begun issuing alerts for anticipated flooding.
In Phnom Penh, flooding was reported in different neighborhoods as the week progressed.
Officials at the UN-backed Khmer Rouge tribunal were forced to work out of the office, as the premises became inundated.
Posted by CAAI News Media at 8:49 am