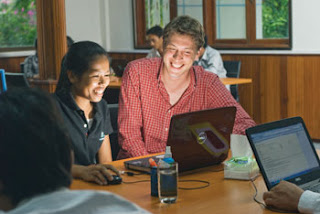 via CAAI
Friday, 15 October 2010 15:01 Jeremy Mullins
FAIR trade coffee is increasingly sipped by globally conscious consumers. But the future may see fair trade certification for outsourcing in the software industry, according to the head of one domestic IT startup.
Dominik Stankowski, executive director at Phnom Penh-based technology firm Web Essentials, said fair trade software outsourcing was a prime motivation behind the creation of the company in April this year.
While tech outsourcing is becoming big business in places such as India, it often employs people who work for low salaries – suffering the pitfalls common to other profit-maximising industries such as long hours and poor working conditions.
But Web Essentials, which employs 22 Cambodian and four expatriates to help run websites built around content-management software called TYPO3, is based on a different business model.
International companies are increasingly concerned with their social relevance, according to Stankowski, providing a ready market for a ‘fair’ approach to unconventional industries such as software.
With about 80 percent of its contracts coming from companies based in countries such as Switzerland, Germany and the United States, the firm claims its services can demand better prices due to an emphasis on the social aspect of its business.
Stankowski said the company paid its employees better wages than most outsourcing firms in developing countries, a move coupled with shorter hours and extensive skills training.
The measure put the company in direct competition with Europe’s freelance software developers, he said.
“We try to provide high quality, with the additional value that we are a social business,” he said.
“My long term goal would be [to create] a certificate for fair trade software.” A large part of Web Essentials – which Stankowsi terms a “social business” – is the training and mentoring of its Cambodian staff.
The firm prides itself on developing its own employees.
“In IT, people are the main resource, as opposed to any other product,” he said.
“That’s why it’s very relevant to invest in staff from a business point of view.”
With a personal history working with overseas firms and in large Cambodian companies, Stankowski said he aimed to better target domestic small and medium enterprises.
“The only way to compete with others is a good ability to learn, and adopt new technology,” he said.
Posted by CAAI News Media at 12:20 am