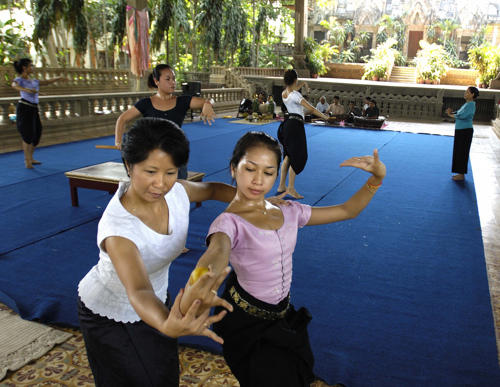 Sophiline Cheam Shapiro, left, helps dancer Mot Pahran with her hand movements during practice at the Khmer Arts Academy in February 2008 in Takmao, Cambodia. (Jeff Gritchen/Press-Telegram)
LONG BEACH - Area residents will get a rare opportunity to see work by internationally renowned Cambodian choreographer Sophiline Cheam Shapiro this weekend at a special show.
Shapiro, who co-founded the Khmer Arts Academy here in Long Beach in 2002 and has earned acclaim for her classical choreography, now splits time between Long Beach and Cambodia and touring with her dance troupe, the Khmer Arts Ensemble.
Although the local audience won't get a chance to see a full production of Shapiro's latest composition, "The Lives of Giants," which premiered in September on a tour of the East Coast, its creator will present a short video of the full stage production and three of the show's dancers will perform portions of the classical concert-length dance. The group will also be accompanied by costume designer Merrily Murray-Walsh.
"The Lives of Giants" is an adaptation of a Hindu-Cambodian legend that talks about the cycle of abuse, violence and power, that has many parallels to modern Cambodian history.
Shapiro said she hopes to bring the full production to Southern California next year. The last show of Shapiro's to play in Long Beach was "Seasons of Migration" at the Carpenter Center.
The show will cap the second year of the Khmer Arts Salon Series, which has presented monthly talks and performances that have spotlighted South and Southeast Asian performing arts.
"I'm looking forward to seeing my students and their parents," Shapiro said by phone from Philadelphia, where the show is now.
The choreographer will only be in Long Beach for a few days before returning to Pennsylvania to rejoin the troupe.
Saturday's performance is being moved from the Khmer Arts Academy's home space on Obispo Avenue to Renaissance High School theater.
As a child, Shapiro survived the Cambodian genocide. After the downfall of the Khmer Rouge and the restoration of arts and dance programs in her home country, Shapiro was one of the first classical dancers to graduate from the Phnom Penh School of Fine Arts. Under the Pol Pot regime, arts and artists were systematically purged. Among the 1.7 million or more Cambodians who died were about 90 percent of the nation's dancers.
Shapiro and her husband, John, whom she married in 1991 founded the Khmer Arts Academy in 2002. In addition to the dance troupe, the academy features traditional music and singing. They are working on creating a media center to produce films and documentaries about classical dance and an archive center.
Shapiro began training Cambodian dancers in her home country in 2006 and has built them into a world class touring troupe.
It's been quite a journey for a woman who began teaching inner-city youth in Long Beach in a cramped space at the United Cambodian Community building as well as in her living room.
Shapiro's professional Cambodian troupe has performed on major stages throughout the world, from Amsterdam to Venice to Vienna to New York to Los Angeles.
Among a long list of honors, she has been awarded a National Heritage Fellowship, the nation's highest honor for a traditional artist.
In addition to sharing Shapiro's latest creation with the community, this Salon event celebrates her receipt of a USA Knight Fellowship. A representative from United States Artists will be on hand to talk about the $50,000 unrestricted cash grant.
Part of the money was used for the Khmer Arts Salon.
Shapiro said she was happy for the chance "to share the opportunity my foundation gave me (with the grant)."
She said she hopes to continue the series next year.
Light refreshments will be served following a Q&A discussion moderated by Salon Series curator Prumsodun Ok.
greg.mellen@presstelegram.com , 562-499-1291
If you go
WHAT: Khmer Arts Salon Series: The Lives of Giants
WHEN: Sat. Oct. 9, 7 p.m.
WHERE: Renaissance High School for the Arts Theater, 235 E. 8th Street, Long Beach
ADMISSION: Free
INFORMATION: http://www.khmerarts.org/
Posted by CAAI News Media at 8:49 am