Published on October 8, 2010
by Cocorioko News 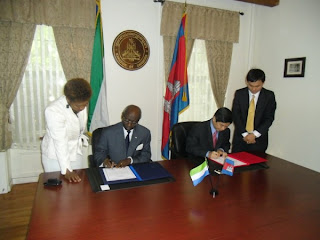 By Leeroy Wilfred Kabs-Kanu
Sierra Leone’s international stature and outreach under the progressive leadership of President Ernest Bai Koroma continue to broaden. Yesterday, at a colourful ceremony held at the Permanent Mission of Cambodia to the United Nations in New York, Sierra Leone established diplomatic relations with the Kingdom of Cambodia , about two weeks after the country entered into similar relations with the South American nation of Uruguay.
The Permanent Representatives of the two countries, Ambassador Shekou Momodu Touray of Sierra Leone and Ambassador Kosal Sea of Cambodia signed the joint communique on behalf of their respective nations.
In his remarks, the Cambodian Permanent Representative hailed the new diplomatic relations between the two countries. “We are glad to establish diplomatic ties with Sierra Leone”, he said and expressed optimism that the two nations will establish areas of cooperation that will be fruitful to both countries. He said that he will do everything within his power to ensure that the two countries achieved the highest level of cooperation to the benefit of both countries. 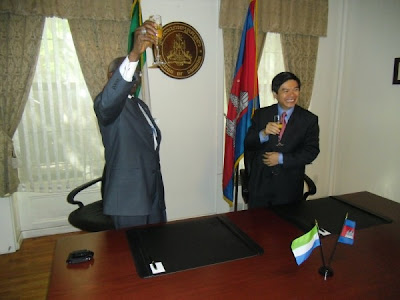 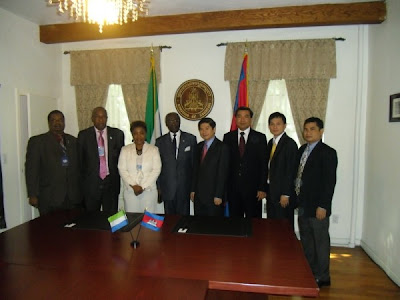 The delegations of the two countries pose for this photgraph : From left Minister Kabs-Kanu, DG Soulay Daramy , Counselor Sulimani and Ambassador Touray (Sierra Leone ) and their  Cambodian counterparts. 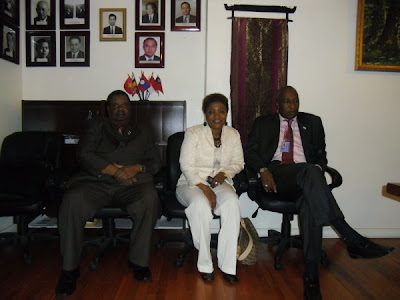 MINISTER KABS-KANU , COUNSELOR SULIMANI AND DIRECTOR-GENERAL SOULAY DARAMY POSE BEFORE THE START OF THE OCCASION.

In response, Ambassador Touray of Sierra Leone also said that he was also happy with the decision by Sierra Leone and Cambodia to establish bilateral and multilateral relations at the diplomatic level .He stated that both countries share a similar history (Apparent reference to the Khmer Rouge crisis in Cambodia and the Civil War in Sierra Leone ) but he was optimistic that the two countries have many areas where they can cooperate fruitfully. He mentioned some of these areas as the socio-economic sphere, agriculture and ameliorating the adverse effects of Climate Change which is affecting the two countries. He said that both Sierra Leone and Cambodia have a lot to offer each other and he expressed the hope that the two countries will make maximum use of their diplomatic relations.
Among essential areas that Cambodia will be very useful to Sierra Leone are in the Agricultural Sector, having built a strong economy after the Khmer Rouge crisis , based primarily on agriculture,with over 59% of the population engaged in farming ; construction and the marketing of her natural resources while Cambodia will benefit from investments and business as Sierra Leone progressively opens up to trade and commerce..
Also representing Cambodia at the ceremony were Mr. Seyla Eat. Ambassador, Deputy Permanent Representative of the Kingdom of Cambodia to the United Nations; Mr. Sokveng Ngoun, First Secretary; Lt.Col. Dara Him, Military Attaché; Mr. Sambo Has, Second Secretary; and Mr. Saravann Ung, Third Secretary.
Apart from Ambassador Touray, Sierra Leone was also represented by the Director -General of the Ministry of Foreign Affairs , Mr. Soulay Basiru Daramy ; the Minister Plenipotentiary to the UN, Mr . Leeroy Wilfred Kabs-Kanu; and Counselor Victoria Sulimani, also of the Sierra Leone Mission to the UN .
Posted by CAAI News Media at 10:57 pm