Khmer Rouge cadres confront their past 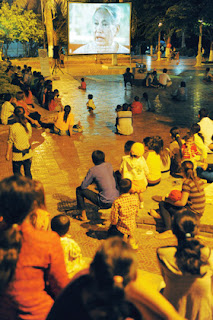 Photo supplied
People gather in Pailin for an outdoor screening of videos documenting atrocities committed during the Khmer Rouge era.
via CAAI
Tuesday, 16 November 2010 20:18 Cheang Sokha
About 300 Cambodian villagers filed into Tuol Sleng Genocide Museum in Phnom Penh on Tuesday, lingering over photographs and searching for relatives lost to the Khmer Rouge.
They paid rapt attention as their tour guides led them through the facility and expressed shock at the variety of torture methods on display.
“I saw the images of torture and I didn’t think it would be like that,” said Sor Song, 52. “I saw it with my own eyes, and I felt shocked to see it.”
The reactions of Sor Song and his fellow tour members are not so different from thousands of others who have visited Tuol Sleng over the years, yet their frame of reference is decidedly different: the Pailin residents are former supporters – and in many cases members – of the movement that operated the infamous prison.
“Hopefully, it will help in understanding why it is important for so many victims to see the persons alleged to be most responsible for the crimes committed … being prosecuted in a court of law,” said Khmer Rouge tribunal spokesman Lars Olsen, one of the court officials who arranged the trip. “We believe it is easier for people to see things and understand when they see things with their own eyes.”
Nestled in the Cardamom Mountains along the border with Thailand, the tiny province of Pailin served as one of the last redoubts for the Khmer Rouge.
On Monday night, several hundred Pailin residents – many of whom were once KR soldiers – gathered outside the provincial hall, where they watched in silence as court officials screened a documentary on the tribunal and the trial of former Tuol Sleng prison chief Kaing Guek Eav, alias Duch.
When court officials including international co-prosecutor Andrew Cayley came to Pailin in September for a community forum, the mood was lively, with questions ranging from why foreign governments will not be tried for their role in the Cambodian conflict to what sort of reparations will be available for victims.
On Monday, however, the mood was sombre as images of the Duch trial and the history of Democratic Kampuchea flashed by on screen.
“I was not aware at all that the Khmer Rouge killed so many people,” said former Khmer Rouge soldier Tok Keo.
The 55-year-old, who lost his left leg to a landmine in 1980, said he had joined the Khmer Rouge in Kratie province in 1975 before fleeing to Northwestern Cambodia with the overthrow of the regime in 1979.
During that time, he said, he had no idea about the thousands of Cambodians exterminated under Democratic Kampuchea.
“Our role was to fight against the Vietnamese troops because we were told that they had come to invade us and we had to protect our land,” Tok Keo said, adding that he and other low-level troops had no contact with KR leaders Nuon Chea and Ieng Sary.
The pair are now awaiting trial in what will be the tribunal’s second case, along with former Khmer Rouge social action minister Ieng Thirith and head of state Khieu Samphan; through the 1990s, Pailin served as their virtual fiefdom as they collected revenue from the then booming gem and timber trade in the area.
Pailin deputy governor Mey Meakk, a former secretary of KR leader Pol Pot, said at the screening that residents in his province supported the tribunal but were wary of pending investigations in the court’s third and fourth cases. Prime Minister Hun Sen has also expressed opposition to these cases due to concerns about national security, telling United Nations secretary general Ban Ki-moon last month that he would not allow them to go to trial.
“We completely agree with Samdech Hun Sen that we don’t want to see additional Khmer Rouge cadres be prosecuted,” Mey Meakk said. “If the court wants to make further arrests, it will cause fear.”
For the rank-and-file, the mood was less one of defiance than of regret.
“The crimes committed were so cruel, and we never believed it before,” Sor Song said.
Olsen said it was evident that many in the group were shocked as they walked the halls of Tuol Sleng during the visit.
“Although the people come from an area that is regarded as a Khmer Rouge area, several people said that they themselves had family members that were killed,” he said.
“Just because you were a Khmer Rouge soldier does not necessarily mean that you subscribed to all the ideology and all the policy implemented by the regime.”
Posted by CAAI News Media at 10:12 pm