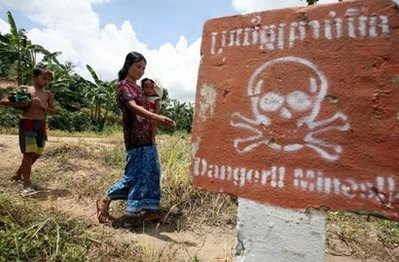 A Cambodian woman carrying a baby walks past a sign warning of the presence of landmines O'Chhoeu Kram village near the Thai border. Fourteen people, including a one-year-old girl, were killed after their vehicle hit an old anti-tank mine in the northwest of the country, police said Wednesday. (AFP/File/Tang Chhin Sothy)

via CAAI
Wed Nov 17
PHNOM PENH (AFP) – Fourteen people, including a one-year-old girl, were killed after their vehicle hit an old anti-tank mine in northwestern Cambodia, police said Wednesday.
The child and 11 other passengers were killed instantly in Tuesday's blast in the province of Battambang, said Buth Sambo, police chief of Banan district.
One person died on the way to the hospital and another on Wednesday morning, he said.
"It is a tragedy that 14 people from five families were all killed," he told AFP.
The group was returning from a day's work at a chilli farm when the driver decided to take a short cut through a field and set off the anti-tank mine.
Landmines and other unexploded ordnance left over from decades of civil war in Cambodia are still killing people on a weekly basis, new figures released on Wednesday showed.
From January to October of this year, 53 people died because of mines or other ordnance, according to CMVIS, the government's data collection body.
The total number of casualties from unexploded ordnance recorded between 1979 and October 2010 stands at 63,754, said CMVIS.
Posted by CAAI News Media at 11:52 pm