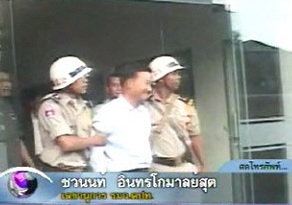 via CAAI
BANGKOK, Jan 3 – Both the Foreign Ministry and the Army Region 1 commander on Monday urged the yellow-clad activists of the Thailand Patriot Network not to rally tomorrow at the border, saying the move could sabotage talks between Thai and Cambodian authorities over the release of seven detained Thai nationals.
Chavanond Intarakomalyasut, secretary to the Thai foreign minister, spoke in response to the news that the so-called ‘patriots’ would protest tomorrow at Sa Kaeo province over the arrest of seven Thais by Cambodian soldiers as they inspected the border.
The seven, including Democrat Party member of parliament Panich Vikitsreth, and members of People's Alliance for Democracy (PAD) movement, were charged in a Phnom Penh Court with illegal entry and illegally entering a military base, crimes with penalties of up to six months and one year.
Mr Chavanond said the MP's wife was allowed to visit her husband at Prey Sar prison, Monday, and Thai embassy officials in Phnom Penh carried food and clothing when they visited.
Regarding little progress in helping the detainees, Mr Chavanont said the ministry has done its best but the long holiday limited possibilities to help.
The foreign ministry aide asked the Thailand Patriot Network to not rally as it will likely cloud the negotiations.
"Cambodia may think that Thailand is using politics to pressure it," noted Mr Chavanond.
"Helping the seven Thais is [our] priority. The border demarcation issue is a [distinct] matter being dealt with by a committee and it will take years to settle the [issue]," Mr Chavanond said.
It is reported that Prime Minister Abhisit Vejjajiva will discuss the matter in Tuesday’s Cabinet meeting and may visit Cambodia to discuss the border dispute with his Cambodian counterpart.
Mr Abhisit however dismissed reports of his visit to Cambodia, saying he can meet Mr Hun Sen at regional pact meetings.
Meanwhile, Thailand Patriot Network leader Chaiwat Sinsuwoung said Monday that his supporters at Government House will leave Bangkok at noon to join the Sa Kaeo rally and are expected to arrive at night.
Mr Chaiwat declined to disclose the specific protest site, but pledged that the rally will be held as planned to demand the release of the seven and act against Cambodia as they were arrested in Thailand.
At the same time, Army Region 1 commander Lt-Gen Udomdej Sitabutr on Monday urged those who will rally on Sri Pen Road along the border to consider the long-term impact of their action on the attempt to resolve the conflicts of the two countries.
If many join the protest, there is possibility that some may get stray into Cambodia, causing more problems, Gen Udomdej said.
He advised the protesters to present their complaint letter to concerned authorities in the provincial seat to avoid igniting further conflicts.
The army commander was confident that Cambodia will cooperate with Thailand in inspecting the area where the seven were arrested under the terms of their existing agreement. (MCOT online news)
Posted by CAAI News Media at 10:11 am