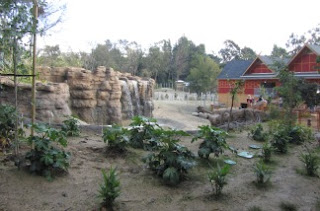 Nazario/KPCC
The LA Zoo's Elephants of Asia Exhibit opened this past December. Following Christmas, zoo officials report greeting as many as 10,000 visitors a day. That's a few thousand more people than entered park gates in 2009 before the 6 acre elephant habit opened.
via CAAI
Patricia Nazario | KPCC
During the holidays, the new Elephants of Asia exhibit at the Los Angeles Zoo drew big crowds. Zoo officials say they’ve greeted as many 10,000 visitors a day. However, one opponent eager to shut down the exhibit that opened in mid-December has his own plans for an elephant sanctuary this year.
Leading the legal fight is Tarzana-based trial attorney David Casselman. His firm is handling the lawsuit against LA Zoo for free.
“While elephants are forced to stay in zoos, they really don’t live in zoos,” says Casselman. “They die in zoos.”
Casselman says he wants to help change that, so he’s establishing a wildlife sanctuary near the Angkor Temples in Cambodia. He plans to open a veterinary hospital there this year, and Casselman says he’s covered most expenses to develop the million-acre jungle preserve. 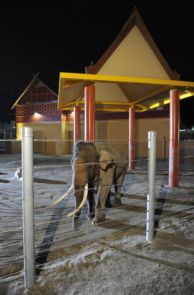 Robyn Beck/AFP/Getty Images
Billy, a 25-year-old male Asian elephant, at the Dec. 15, 2010 gala opening of the new Elephants of Asia exhibit at the Los Angeles Zoo.
“We’re hoping to have ponds and underground viewing area for elephants and tigers, Clouded Leopards and other animals,” he explains.
And, he hopes, to open it up for eco-tourism in a couple of years.
LA Zoo Director John Lewis says its $42 million exhibit, about 6 square acres, includes some elements that activists like Casselman say the animals need — and brings the experience of life in the wild closer to home.
“We’ve listened to what they were saying,” says Lewis. “I think we’ve incorporated a lot of things that when the public look at it and considers it, they’ll see that we took good care of the animals.”
The Elephants of Asia Exhibit — the largest habitat the LA Zoo’s ever built — houses Billy the bull and females Tina and Jewel now. Zoo officials say it can accommodate nine more elephants.
Posted by CAAI News Media at 9:44 am