via CAAI
Published: 28/01/2011
It was essentially an exercise in "sabre-rattling", but the military's show of strength near the Cambodian border in Si Sa Ket province this week involved a complex set of military and political manoeuvring. 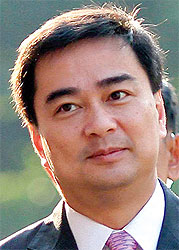 Abhisit: Supported show of strength
The intriguing part of this mission was to make Cambodia remove a stone tablet declaring ownership of the disputed border area around Preah Vihear temple.
For reasons that might have more substance than has been revealed, the Cambodians quickly acquiesced and smashed the tablet that had been erected on the orders of Cambodian Prime Minister Hun Sen.
A high-level source said the show of force to pressure Cambodia to remove the tablet, erected in front of Kaew Sikha Khiri Sawara temple, received the green light from Prime Minister Abhisit Vejjajiva.
Cambodia built the temple in 1999 in the disputed area and ignored protests to dismantle it. Monks, who included ordained soldiers, stayed at the temple to reinforce Cambodia's claim to the 4.6-square-kilometre disputed area.
But after the stone tablet was erected declaring "Here! is Cambodia", Lt Gen Tawatchai Samutsakhon, the commander of the 2nd Army, met Cambodian senior military officers at Wat Kaew Sikha Khiri Sawara and asked them in no uncertain terms to remove it.
But while talks were going on, the military was devising a more ambitious and proactive plan to persuade the Cambodians.
First, a company of soldiers was moved to the border to conduct an exercise with heavy weaponry. This put them in a position to confront Cambodian soldiers who were being deployed in greater numbers across the border.
The second step was to mobilise four companies of soldiers who would take action if Cambodia refused to remove the tablet.
Then, army chief Prayuth Chan-ocha ordered the relocation of three new multiple rocket launchers to the border area in Si Sa Ket as part of the military exercise. They would be used to fire warning shots if necessary.
"The plan was to aim the weapons at a local mountain if Cambodia did not remove the tablet," the source said.
As Cambodia became more aware of Thailand's plans, it kept civilians at military bases to act as a human shield, according to the source.
The fourth step was for the air force to send fighter jets to the area and create sonic booms close to the border.
But there was no need to go to the third step as Cambodia decided to demolish the tablet.
"It is believed [Cambodian authorities] may be upset and frustrated and will find ways to avenge this," the source said.
"They may complain and accuse Thailand of treating them badly. But the show of force was to show ownership of the land and protect the dignity and reputation of our soldiers who have been blamed for being weak or too lenient towards Cambodia.
"I admire Prime Minister Abhisit for giving the military the freedom to devise the show of force."
He said a fifth step to ban Thais from crossing to gamble at 10 Cambodian casinos in Poipet was a part of the plan.
Posted by CAAI News Media at 12:12 am