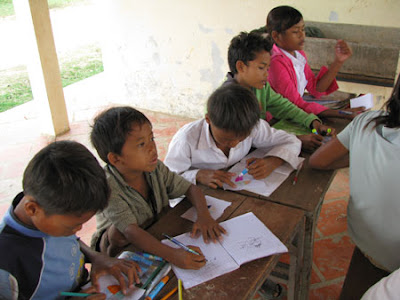 Working as a volunteer teaching English to a group of Cambodian kids must be easy, right? TNT's Carol Driver discovered the reality...
There are 40 beaming faces staring up at me waiting for my next move. Their eyes sparkle and they giggle as I jump up and down on the spot in front of them, attempting to sing “with a moo-moo here and a moo-moo there” from Old MacDonald’s Farm.
I know I look ridiculous, but I’m far from caring. It’s 2pm in Cambodia and it’s a searing 40C. We are crammed into a tiny, non-air-conditioned make-shift classroom in Phnom Penh.
I’m trying desperately to keep their attention as they want to go and play.
Thankfully it works. By the time I add a pig, cat, cow, horse and dog to the story, they’ve got the right idea and start chanting the animal noises.
I manage to make it to the end of the lesson – sweat running down my back.
Destination guide - Cambodia
I’m in the country’s capital city for three weeks as part of a volunteer project, helping the charity Riverkids, which offers children at risk of being trafficked or sold into prostitution, a free education.
On my first day, I’m taken to the slums where many of the kids live. The scenes are heartbreaking. The tiny, wooden shacks balance around mud paths. There are dirty, naked toddlers wandering aimlessly. We see some women working, cooking meals, while most of the men are lying down, watching TV on dated, black-and-white screens. Many of them have drink and drug problems.
The children look helpless. It’s easy to see how celebrities such as Madonna and Angelina Jolie think they’re helping communities by adopting children. But it’s charities such as Riverkids that are really stopping the cycle of poverty. 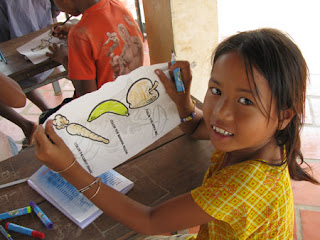 I’m staying at a guesthouse with around 15 other volunteers who are all placed at various locations across the city.
My project is a 25-minute hair-raising tuk-tuk ride away, weaving in and out of the chaotic traffic on lawless roads. In the classroom, volunteers prepare their own lessons. It’s an early start my day kicks off at 7.30am with a group of nine to 15-year-olds.
As I walk into the classroom, the students stand and chant “Good morning teacher” in Khmer and then English, as they clasp their hands together in the traditional respectful greeting.
After English is computer studies – but, as Riverkids doesn’t have the resources to buy an electricity generator, and there’s a power cut every day, the lessons are always cut short.
With no electricity, there are also no fans, and the intense heat makes it increasingly difficult to concentrate.
During breaks, the children rush out into the dirt-floor playground, without a care in the world, and engage in boisterous games or sing and dance.
They chase each other, pulling one another to the floor. There are scrapes and hits as well as bruises and cuts as they get into the spirit of the game – but not once do any of them cry.
Commercially, Cambodia is growing as a traveller destination. However, due to political instability which ended only recently, it’s far behind neighbouring Thailand in terms of popularity. But tourists can help in terms of bringing money to the country.
In Phnom Penh, Friends and The Lazy Gecko cafe are two restaurants serving great local food which also help support charities. And there are great bars and restaurants around the Riverside and Lakeside areas.
To really immerse yourself in the country’s culture, you have to understand its turbulent past.
The only way to see firsthand the devastation the Cambodian people have endured is by visiting the haunting Tuol Sleng Museum and Killing Fields.
The museum is a former school used by ex-dictator Pol Pot’s Khmer Rouge regime as a security prison where from 1975 to 1979, between one and two million people were held, starved and tortured, and then sent to their deaths in the Killing Fields.
The photos of the prisoners on the walls make for grim viewing and drives home just how recent the country’s turmoil was. For less emotive sightseeing, visit Wat Phnom temple or the National Museum, home to a fine collection of Khmer art.
Back at Riverkids for my afternoon class, I raid the charity’s limited storeroom for supplies for my last lesson.
It’s art and singing with children as young as three – some of whom speak no English, so communicating with them is difficult.
The classroom is a 15-minute walk and, although it’s a struggle carrying bags filled with paper and paints, it’s a great way to meet the locals, who are friendly – greeting me with curious smiles and acknowledgements of “hello teacher”.
Despite the fun element attached to these classes, I find them the most stressful lessons. Controlling 40 demanding children who are armed with paint, water and fingers – and who don’t understand English – isn’t easy.
I spend the next hour running around, clearing up spilt water, helping children who have difficulty drawing. At the end of the lesson, the children playfully smear colours down each other’s faces and in one another’s hair.
I shrug my shoulders and laugh as the kids line up at the small sink to wash their hands and faces.
Exhausted, I make the journey to meet with the other volunteers, who are also tired and stressed, and we talk about how difficult our days were and what went wrong during our lessons.
As I pull a text book from my bag, a note slips out. “I love you teacher from Srey Mai,” it reads, and it puts a smile on my face.
It’s then I realise why “voluntourism” is growing so much in popularity – more of us now want to do something useful during our holidays, to immerse ourselves in a culture and country rather than just the hotel swimming pool.
While it’s ultimately the students who I want to benefit from my time in Cambodia, I can’t help think that it’s the children – with their robust attitudes and camaraderie despite their deprived pasts and uncertain futures – who have taught me the greater lesson. And that’s what makes it so rewarding.
WHEN TO GO: Dry season runs from November to April.
GETTING THERE: Qantas (with partner Jetstar Asia) offers flights from London to Phom Penh via Singapore. Fares start from £862 (including taxes) for travel April 8 – June 15. See qantas.com.au.
GETTING AROUND: On the back of a motorbike, or there are tuk-tuks as well as taxis. Make sure you barter though.
VISAS: Required but available on arrival.
CURRENCY: Riel, although Cambodians prefer American dollars. 1 GBP = 1.6 USD = 6 RL
LANGUAGE: Khmer.
GOING OUT: A beer costs $2.
ACCOMMODATION: Shared accommodation is included in the i-to-i Meaninful Travel’s Teaching English in Cambodia course, which runs from four to six weeks, priced from £860.
GET MORE INFO: i-to-i.com
Posted by CAAI News Media at 3:33 pm