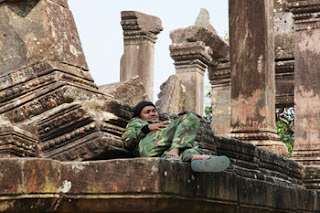 Photo by: Heng Chivoan
A Royal Cambodian Armed Forces soldier relaxes at Preah Vihear temple during a lull in fighting with Thailand earlier this month.
via CAAI

Cambodian and Thai military commanders have reportedly agreed to a ceasefire in the disputed areas close to Preah Vihear temple, after clashes in the area earlier this month left at least 10 people dead and dozens injured on both sides.

“The result of the meeting has not been revealed as it was held secretly,” Touch Ra said.

But he added that since the meeting was conducted, the situation along the border has returned to normal.

“Most of the people have returned to their homes and are continuing with their businesses.

“The situation has calmed down and the people have no more fear of gunfire along the border.”

The talks followed four days of clashes from February 4-7, in which troops traded artillery, mortar and small arms fire in disputed areas close to Preah Vihear temple, which sustained damage in the skirmishes.

The Bangkok Post reported today that military commanders from both sides had inked a ceasefire agreement following Saturday’s talks, though it is unclear whether the agreement will hold.

A previous truce was called on February 5, but violence flared up again the next day.

The paper quoted an army source as saying Second Army commander Thawatchai Samutsakhorn was part of a Thai delegation led by Army chief-of-staff Daopong Rattanasuwan. The Cambodian delegation was led by Hun Manet, according to the report.

“All is well,” said Thawatchai Samutsakhorn after the agreement was signed at a restaurant near the Choam Sa-Ngam border crossing between Oddar Meanchey and Sisaket provinces.

The apparent agreement has stoked nationalist sentiment in Thailand, with Yellow Shirt activists from the People’s Alliance for Democracy claiming it could disadvantage Thai claims to disputed territories close to Preah Vihear.

At a press conference in Bangkok, Yellow Shirt spokesman Panthep Puapongpan said the conditions under the ceasefire deal had put Thailand in an underdog situation and would lead to a permanent loss of Thai land to Cambodia, the Bangkok Post reported.

Prime Minister Abhisit Vejjajiva denied the claims in his weekly address today, saying the agreement “will not lead to any loss of Thai soil as speculated”.

The agreement comes ahead of a meeting of ASEAN’s foreign ministers in Jakarta tomorrow, which is set to discuss the stand-off between Cambodia and Thailand.

Prime Minister Hun Sen said last week that at the meeting Cambodia will press Thailand to sign a permanent ceasefire under ASEAN’s auspices, requesting that the bloc deploy observers into disputed border areas.

Thailand has been steadfastly opposed to a multilateral solution to the border conflict, which has erupted into sporadic violence since July 2008, when UNESCO listed Preah Vihear temple as a World Heritage site over Thai objections.

Thai state media also reported on Saturday that former UNESCO Director General Koichiro Matsuura will next week pay a visit to Bangkok and Phnom Penh to hear both sides’ views on the recent conflict, though he will not visit disputed areas along the border.
Posted by CAAI News Media at 10:11 am