Leaving no soldier behind 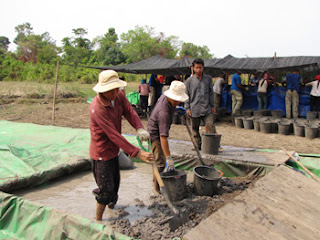 Photo by: Matt Lundy
Sann Thuon (left) breaks down clumps of dirt in a plastic-lined pit so that members of the recovery team can more easily collect bone fragments and other evidence.
via CAAI
Sunday, 20 February 2011 18:34 Matt Lundy
Kampong Cham province
For more than four decades, Sann Khuon has intermittently lived in Kampong Cham province’s Memot district – on land where three American soldiers are suspected to have been killed and buried during the Vietnam War.
About 40 years ago, when Sann Khuon was six years old, he claims to have seen a helicopter shot down near his home, some three kilometres from the Vietnamese border.
“I saw when the helicopter was on fire,” he said. “I didn’t dare to come close to the helicopter because I was chased away by the Vietnamese troops. But I know from the old people in the area that Americans have died here.”
After the fall of the Khmer Rouge in 1979, Sann Khuon and his family resettled on their plot of land, which he says was littered with remnants of a blasted helicopter.
“On my first time planting rice fields here, aircraft parts cut my cow’s feet all the time,” he said. “Later, villagers collected the scrap metal and sold it to brokers.”
Three decades later, Sann Khuon and a team of 20 Cambodians are excavating the suspected burial site.
They’re working for a 12-person recovery team from the Joint POW/MIA Accounting Command, a task force within the United States Department of Defense that recovers the bodies of missing soldiers primarily from World War II, Cold War conflicts, the Korean War and the Vietnam War. 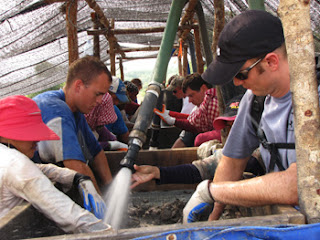 The recovery team and a group of Cambodian labourers use a high-powered hose and mesh screen to search for evidence from the site where a US military is believed to have been shot down.
JPAC has been excavating in Kampong Cham and Kratie provinces for more than two weeks – the command’s 44th joint field activity in Cambodia.
The recovery team stationed in Kratie is searching an underwater crash site for one American soldier, whose helicopter was shot down into the Mekong River.
The other team is searching for three bodies in Memot district.
Lee Tucker, public affairs officer for CPAC, said the Kampong Cham excavation site was determined based on research from a CPAC investigative team, including “eyewitness accounts and locals actually pointing to the location”.
Near the site, he said, a helicopter carrying eight soldiers was shot down by a North Vietnamese unit.
“[The Americans] were able to crash land and a fire fight ensued,” he said.
“There were three killed on scene, and the rest were able to escape.... it’s the three killed on scene that we’re looking for.”
Further details about the site and its history are scant.
Tucker says JPAC knows the missing soldiers’ identities, but will not reveal that information until a laboratory in Hawaii has confirmed whatever evidence is unearthed.
The date of the helicopter attack is also kept confidential, as is the site’s location in Memot district.
To find remains at the excavation site, the recovery team performs a three-step process. Workers dig four-by-four-metre sections, filling wheelbarrows with soil.
Since the area’s soil is thick and muddy, it’s soaked in two basins to break it down.
Finally, the majority of workers hose the sediment through a wire screen, collecting whatever solid matter is caught in the fine mesh.
Laurel Freas, a forensic anthropologist working at the site, says the recovery team is looking for any evidence that might point to the recovery of missing soldiers.
“We’re looking for, of course, human remains,” she said. “We’re looking for material evidence, which would be personal [items].
“And we’re looking for what we call life-support evidence, which is military equipment that the individuals would have had on their person.”
Any collected evidence is sent to the laboratory in Hawaii.
The forensic anthropologists conduct their analysis “blind”, meaning they don’t know the identity of the body under analysis “in order to prevent any subconscious bias from influencing the scientist’s analysis”, according to a description of the investigative process on the JPAC website.
The final step is handing over the soldier’s remains to family members, a process that Freas has been a part of in her 16 months with the command.
“There’s a lot of relief, there’s a lot of gratitude,” she said of the families’ reactions.
“There’s also mourning, sadness. It’s a complicated set of emotions for them.”
Captain JoAnn Kennedy, the recovery team leader, served two years in Iraq with the American military.
The command’s mandate – “Until they are home” – is personally reassuring for her.
“The peace of mind our families get knowing that there’s a unit like this out there – that if we go missing our government will not stop looking for us – is a comfort for them,” she said. “And in turn it’s a comfort us”.
Still, there are no guarantees the Kampong Cham excavation will turn up any bodies.
The process of recovering and identifying missing soldiers can take years.
More than 1,700 Americans are unaccounted for from the Vietnam War, including 59 that are presumed to be in Cambodia.
To date, 31 bodies have been recovered in the Kingdom.
Freas said she couldn’t comment on whether any remains had been found during the current excavation, though Tucker said last Tuesday that “so far we haven’t found anything”.
For the next four weeks, the recovery team and its Cambodian labourers will toil in the heat, digging and sifting through Sann Khuon’s land for any trace of the three Americans who are said to have died in Memot district.
Freas says it would be “disappointing” if the mission didn’t find any human remains, but that any excavation, even those that don’t unearth solid evidence, proves worthwhile.
“There is that disappointment maybe, but there’s also resolve,” she says.
“It’s strengthening for you to step back from it and say, ‘Alright, we’re gonna keep going, we’ll keep looking till we find them’.
“And now we know where they’re not.”
Posted by CAAI News Media at 10:20 am