via CAAI
Thailand sticks to line of opposing outsiders
Published: 17/02/2011
Thailand has rebuffed a plan by Cambodia to ask the Association of Southeast Asian Nations to send observers to monitor the shaky ceasefire along the border. 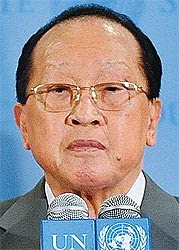 Hor Namhong: Thailand ignored UN
The move comes less than a week before foreign ministers from the Asean member countries meet in Jakarta where they will discuss the border spat.
There has also been an upturn in fighting between Thai and Cambodian troops at Phu Makhua mountain in Kantharalak district of Si Sa Ket province, which is part of the area under dispute.
Cambodian Foreign Minister Hor Namhong told reporters in Phnom Penh yesterday on his return from the United Nations Security Council meeting on Monday night that Cambodia would lodge a request for Asean observers at the Jakarta meeting.
The meeting on Tuesday will be chaired by Indonesian Foreign Minister Marty Natalegawa, who also attended the UNSC meeting on Monday along with Thai Foreign Minister Kasit Piromya.
Hor Namhong said Thailand had ignored the Security Council's call on Monday for restraint and that it was necessary for Asean to step in to ensure peace on the border near the 11th- century Preah Vihear temple.
"We will ask Asean observers to come to the Preah Vihear area to make sure that a permanent ceasefire holds," he said. "Let's see whether the Thais accept or not."
Mr Kasit's secretary, Chavanond Intarakomalyasut, dismissed Cambodia's call for Asean involvement. He said the plan would be shot down when it was put on the negotiating table.
"Mr Hor Namhong failed to convince the UNSC to send its observers to the [disputed] area," Mr Chavanond said.
"That's why he keeps trying to throw the matter to Asean to take it up."
Thailand was confident the regional grouping would not intervene in the dispute but would act as a facilitator in putting an end to the border conflict between Bangkok and Phnom Penh.
Thailand and Cambodia disagree on how the border conflict should be resolved. Thailand insists on bilateral talks while Cambodia envisages a role for outside parties.
Thailand has proposed that the problem be thrashed out at the Thai-Cambodian Joint Boundary Commission meeting next Sunday. But Cambodia appears noncommittal.
"If Cambodia rejects the bilateral channel, I can't see any other mechanisms to replace it," Mr Chavanond said.
The two countries accused each other at the Security Council meeting in New York on Monday of instigating the fighting on Feb 4 and several more clashes after that. They are expected to trade accusations again at the meeting of Asean foreign ministers.
The UN security body has called for a permanent ceasefire and rejected Cambodia's call for UN intervention and peacekeepers to be stationed at the disputed frontier.
Mr Kasit, who will lead the Thai delegation to the Indonesian capital, will brief Defence Minster Prawit Wongsuwon on the outcome of the Security Council meeting.
Gen Prawit and Cambodian Defence Minister Teah Banh will decide whether there will be a permanent ceasefire in line with the call by the Security Council, Mr Chavanond said.
The UN has ordered its six staff to leave the Cambodian province of Koh Kong opposite Trat province because of the border skirmishes.
UN security officials told staff by email that travel to Koh Kong town was restricted "until further notice".
The UN email said up to 70% of the town's population had left because of the border tensions.
The UN has also evacuated staff from areas near Preah Vihear temple.
Posted by CAAI News Media at 6:01 pm