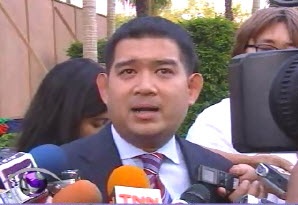 via CAAI
BANGKOK, Feb 16 - Thai Defence Minister Gen Prawit Wongsuwan and his Cambodian counterpart Tea Banh will hold talks on establishing a permanent ceasefire along their countries' disputed border as urged by the United Nations Security Council, said a senior Thai foreign ministry official on Wednesday.
Chavanond Intarakomalayasut, a secretary to the Thai foreign minister, made remarks following the latest skirmishes at the Thai-Cambodian border in Si Sa Ket's Kantaralak district on Monday just few hours after the United Nations issued a statement calling for a permanent ceasefire from both sides and supporting bilateral talks to solve the border conflict.
Mr Chavanond stated the latest clashes may have a negative impact on the bilateral talks if Cambodia failed to stop firing into Thai territory.
"Defence Minister Gen Prawit will discuss the matter with Foreign Minister Kasit Piromya prior to bilateral talks with Cambodian Defence Minister Tea Banh to ensure that the two ministries will carry out their mission in the same direction," said the secretary.
Mr Kasit was in New York to present evidence to the Security Council after the Cambodian government submitted a letter of complaint accusing Thailand of firing arms into Cambodian troops first, damaging the ancient Preah Vihear temple and calling on the world body to intervene in the dispute.
When asked why Mr Kasit did not hold talks with his Cambodian counterpart Hor Namhong while they were in New York together, Mr Chavanond said the Cambodian foreign minister had to hurry back to his country and that he believes both ministers will have an opportunity to meet each other again on Feb 22 in Indonesia where a meeting of foreign ministers of the Association of Southeast Asian Nations (ASEAN) will be held.
Regarding the next meeting of Thai-Cambodian Joint Boundary Commission (JBC) scheduled for Feb 27, the secretary said Thailand is still waiting for an official confirmation from Cambodia.
Mr Chavanond added if Cambodia rejects the bilateral mechanism, no other mechanism can solve the border conflict, furthermore the world community may also not understand why Cambodia has to refuse the talks with its neighbour. (MCOT online news)
Posted by CAAI News Media at 12:20 am