Cambodia: Who Ordered the Blocking of Opposition Websites?


via CAAI
Posted 27 February 2011
Last month, an anti-government website was blocked by some Internet Service Providers (ISPs) in Cambodia. The ISPs later denied that it received an order from the government to ban the critical website. The government also insisted that it is not a policy to block the website of opposition groups. Fortunately, access to the website was restored immediately.
But the issue of web censorship in Cambodia continued to sizzle this month as media groups leaked a letter by government information authorities asking ISPs to censor websites that allegedly harm Cambodian morality and tradition.
Sieng Sithy, deputy director of the Directorate of Telecommunications Policy Regulation at the MPTC, wrote an email to Ezecom, Metfone, Citylink, Digi, AngkorNet, WiCam, TC, Camnet, Online and Camintel thanking them for “cooperation” in blocking access to several websites, including KI-Media, Khmerization and a site featuring the art of political cartoonist Sacrava.
The government gave conflicting statements on the veracity of the letter. The Ministry continues to assert that web censorship is not being pursued by the government. Here are some parts of the controversial letter:
The e-mail, which was electronically signed by Sieng Sithy, deputy director of the ministry’s policy regulation, addresses service providers WiCam, Telesurf and Hello.
“We found that you are not yet taken an action, so please kindly take immediate action”
“Here below [are the] websites.”
“Again and again, In case of not well cooperation is your own responsibility”
Internet users in Cambodia complained that the mentioned websites have been inaccessible for many times this month. The ISPs blamed it on technical problems. 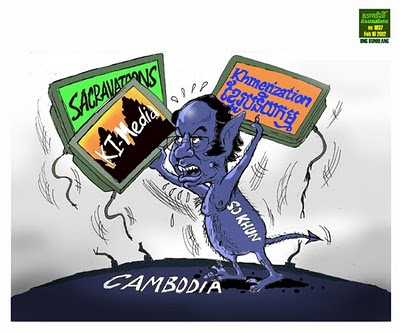 The Cambodian League for the Promotion and Defense of Human Rights (LICADHO) condemns the reported blocking of critical websites
…the Internet was the only audio or visual media not fully controlled by the government. The censoring of controversial Web sites marks a significant milestone in the march toward a more oppressive media environment
The group also wants ISPs to explain to their customers why they agreed to comply with the government request to censor the websites
Did the government simply make a “request” that ISP providers block certain sites? If so, ISPs owe their customers an honest explanation as to why they have chosen to comply. Hiding behind excuses simply makes them complicit in the censorship campaign. Concerned customers should call their ISPs and demand a legitimate explanation for the ongoing outage of political opposition Web sites. Better yet, all ISPs should decline the government's request and restore full Internet access immediately.
Customers deserve to know whether they are giving their money to a company that is helping to enable a government censorship campaign.
The Committee to Protect Journalists is also worried about the intensifying media censorship in Cambodia.
According to media reports, internet use in Cambodia increased by 500 percent in the past year.
Posted by CAAI News Media at 7:00 am