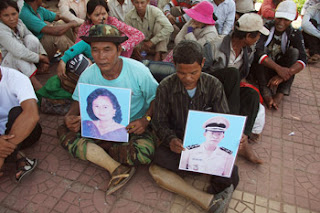 Photo by: Pha Lina
Members of a disabled community in Kratie province protest outside Prime Minister Hun Sen’s Phnom Penh residence last year.
via CAAI
Sunday, 27 February 2011 19:50 May Titthara
A disabled veteran who was arrested last year in connection with a land dispute in Kratie province has died in custody, an incident family members and rights workers allege stems from mistreatment by prison officials.
Vong Vireak, 42, died last Wednesday after complaining of health problems earlier in the week, his wife, 45-year-old So Sokmean, said today.
Toch Sakhoeun, president of Kratie provincial court, said the man died at the provincial hospital, though So Sokmean said he had passed away while in prison.
“When my husband got sick, I asked that he receive treatment but they did not allow it,” she said, adding that she had discovered a number of bruises and injuries on her husband’s dead body that she believed were evidence of torture.
Doctors did examine her husband in prison, So Sokmean said, but concluded that he needed to be moved to Phnom Penh for treatment, a request that was denied by the provincial prosecutor.
“It is the fault of the prison director and the prosecutor,” she said.
“My husband would not have died if they allowed him to be treated in Phnom Penh.”
Toch Sakhoeun said, however, that Vong Vireak had received proper medical attention at the local hospital. Koy Kim Sorn, deputy director general of the General Department of Prisons at the Ministry of Interior, said correctional officials had followed the correct protocol in handling the case.
“When prisoners get sick, there are doctors at the prison, and if doctors do not have the ability to save them, they are taken to the provincial hospital,” he said.
Sam Saron, director of Kratie provincial prison, said today that he was “too busy” to comment.
Vong Vireak and another man from a local veterans group, the “Association Cripple Development”, Keo Chhit, were arrested in August on charges of threatening local wildlife officials.
The ACD claims that about 620 member families were promised 4,000 hectares in Kratie’s Snuol district after applying for a social land concession in 2008.
In April last year, however, officials announced that the land belonged to five private companies.
“According to the complaint, the two men were ringleaders and incited about 500 people to grab land,” Mak Pheang, investigating judge at Kratie provincial court, said at the time.
The men faced up to five years in prison if convicted, though a trial in the case has yet to be scheduled.
Yan Yoeuk, director of the ACD, said the families’ situation remained unresolved and that they planned to stage a protest in front of Prime Minister Hun Sen’s Phnom Penh residence next week.
Chan Soveth, a senior monitor for local rights group Adhoc, said prison director Sam Saron had informed him that Vong Vireak had been suffering from high blood pressure and liver problems at the time of his death.
“Prisoners who get sick cannot avoid death because the authorities have no willingness to save prisoners’ lives,” he said.
Ouch Leng, head of the land programme for Adhoc, went further, saying the injuries on Vong Vireak’s body and the fact that he had recently been separated from his friend Keo Chhit provided evidence that he had been abused by prison officials.
Some 83 prisoners died in custody last year, according to the General Department of Prisons.
Posted by CAAI News Media at 6:49 am