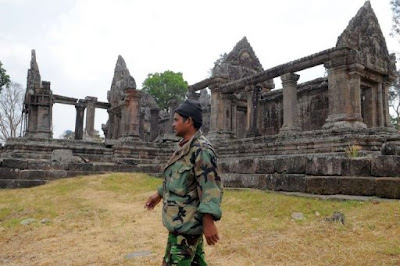 A Cambodian soldier walks past the Preah Vhear temple

via CAAI
BANGKOK — Thailand's powerful army chief on Wednesday said Indonesian observers were not wanted in a disputed area on the Thai-Cambodia border, despite an earlier agreement between the neighbours.
"Regardless of where the observers are from, we don't want them.. in the disputed area because it's dangerous and will complicate the problem", General Prayut Chan-O-Cha said.
The Thai defence ministry, armed forces and military commanders reject the idea of outside monitors in the territory, he said, before conceding that it was up to the government to decide.
A simmering border dispute over a small piece of land around an 11th century temple erupted in early February and heavy fighting between the armies of both sides claimed at least 10 lives and displaced thousands.
Prayut said the longstanding General Border Committee, chaired by Thai and Cambodian defence ministers, should be convened as planned in April to help the countries decide whether observers were wanted in the area.
Government spokesman Panitan Wattanayagorn denied a split between the government and military view of the situation.
"There's no change in position," he said, adding that the GBC meeting would be held first to iron out details such as location and agenda before observers would be allowed in the territory.
"I asked Khun Prayut... he said he did not reject the principle. They have to be clear on the conditions and in order to do that the GBC should resume first," he said. Khun is a Thai term of respect.
Thailand and Cambodia have each accused the other of starting the border clashes, which erupted around the Hindu temple of Preah Vihear.
Ties between the neighbours have been strained since Preah Vihear was granted UN World Heritage status in July 2008.
The World Court ruled in 1962 that the temple belonged to Cambodia, but both countries claim ownership of a 4.6 square kilometre (1.8 square mile) surrounding area.
The initial deal to allow observers into the area came in late February during a meeting of foreign ministers from the Association of Southeast Asian Nations (ASEAN) in Indonesia, which holds the current chair of the 10-member block.
At the time Indonesian Foreign Minister Marty Natalegawa, speaking on behalf of ASEAN, said it was a "unique arrangement" for the grouping, which devotes most of its time to trade and avoids conflict resolution.
The observers, including soldiers and civilians, were expected to be embedded with armies on either side of the disputed border and report to the governments in Bangkok and Phnom Penh on any violations of the ceasefire.
Posted by CAAI News Media at 3:15 pm

It's a shame you don't have a donate button!
I'd certainly donate to this brilliant blog! I suppose for now i'll settle for bookmarking and adding your RSS
feed to my Google account. I look forward to fresh updates
and will share this blog with my Facebook group.
Talk soon!

This post will assist the internet visitors for setting up new webpage
or even a blog from start to end.

Check out my weblog; svbconnect

Greate article. Keep writing such kind of info on your blog.
Im really impressed by your blog.
Hey there, You have performed a fantastic job. I will definitely digg it and in my view suggest
to my friends. I'm confident they'll be benefited from
this web site.

Here is my site :: franchises

Hi to all, because I am actually eager of reading
this webpage's post to be updated daily. It carries nice information.