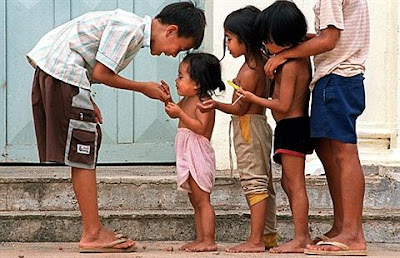 Photo: AFP
Cambodian orphans play together as they wait for adoption at Kien Klaing orphanage center in Phnom Penh, (File)
The Cambodian government has begun investigating the country’s orphanages; just days after the United Nations Children's Fund expressed its concerns that nearly three out of four children in the country's orphanages have at least one living parent.
Earlier this week, UNICEF said most of the 12,000 children in Cambodia’s orphanages are, in fact, not orphans. Nearly three-quarters of them have one living parent, yet the number of children in care has more than doubled in five years.
UNICEF said the number of orphanage centers has nearly doubled, to 269 facilities in the same period.
Just 21 of those are run by the government. The rest are funded and run by foreign donors and faith-based organizations.
Tourism
UNICEF country head, Richard Bridle, told VOA he is concerned many centers have turned to tourism to attract funding and that, by doing so, they put children at risk.
Bridle says even the best-intentioned tourists and volunteers are funding a system that is helping to separate children from their families.
International studies have shown that children are better off in a family or community setting.
That also happens to be a much cheaper way of caring for them, says Sebastien Marot, the founder of Phnom Penh’s respected street kids organization called Friends International, which was established 17 years ago.
Money-making venture
Marot says the figures from UNICEF indicate a serious problem: Either there is a misconception about stability in Cambodia in the 21st century, or "unscrupulous people" are engaging in a charity business and using children to make money.
"We have been working 17 years and we haven’t placed kids in an orphanage. And, we are working with the most marginalized kids that have the most difficult families. We haven’t placed any in an orphanage in eight years, except for heavily disabled or very, very sick, because the families are really in no capacity for taking care of them. And, that is the real situation," Marot said.
Marot acknowledges that most tourists going to orphanages are acting out of pure motives when they visit the children and give money.
But he says there is little doubt that some Cambodian orphanages have been set up to make money from foreign tourists.
Visitors to Cambodia’s tourist centers of Phnom Penh, the temple city, Siem Reap and the beach resort, Sihanoukville, are regularly bombarded with pleas to visit orphanages.
Marot’s advice is that tourists should behave as they would at home.
"The real question is: Would you do this in your own country? No. Have you ever visited an orphanage in your own country? No. Why? Because an orphanage is a safe place for kids and has to have a child protection system - it is to protect those children," Marot noted. “They are already totally vulnerable. Having people coming from outside is just not acceptable."
A spokesman for the Social Affairs Ministry, which is carrying out the inspections, admitted this week that the government does not know whether the thousands of children in care are being treated well or badly.
The spokesman says it is unclear how long it will take to inspect all 269 orphanages, but promises that those found to be sub-standard or in contravention of the law will be closed.
Posted by CAAI News Media at 3:24 pm

Perhaps you should make improvements to the website identify for you
to some thing snappy. Initially when i first clicked on a couple of alternative
effects, simply because these people have a better concept.

But things i required I ran across right here.
My site :: Public Records