Billboards to be dismantled 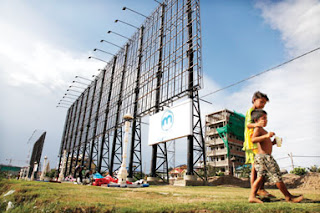 Photo by: Heng Chivoan
Children walk past a billboard that was stripped of its advertisement yesterday in Chroy Changvar commune, in Phnom Penh’s Russei Keo district. Three other nearby billboards blew over on Tuesday, damaging property and injuring one woman.
http://www.phnompenhpost.com/


via CAAI
Thursday, 12 May 2011 14:02 Sen David
Two billboards on Chroy Changvar peninsula in Russei Keo district are set to be dismantled after three others nearby collapsed on Tuesday amid strong winds, injuring a woman and leaving at least four homes damaged.
Chin Pou, director of the commercial billboard office at Phnom Penh Municipal Hall, said yesterday that the company that constructed the structures, Moon Media, had decided to remove the remaining two in view of obvious safety concerns.
“The company decided to take out these two billboards because most of the residents appealed to have them taken out and residents think these billboards cannot stand up against the force of the wind,” Chin Pou said.
“This area is on the riverside, so when a strong wind comes up, sometimes the billboards cannot stand up. The recent incident is an example of this.”
An announcement on the City Hall website said yesterday that Moon Media had “intelligently and responsibly decided to remove the remaining billboards”.
The remaining two structures carried advertisements for the mobile operator Mfone and the Japanese company Kansai Paint. The three that went down on Tuesday had been commissioned by mobile operators Hello and Beeline and by Hennessey cognac.
As of late yesterday afternoon, the signs had been removed, though the metal structures that had held them in place remained, prompting concern from some on the peninsula.
“We thank the authorities and the company for taking out the signs, but I am so worried that the billboards will be put in place again because the legs have not been removed,” said Vern Vannak, 21.
“The authorities and the company must think about our safety before business.”
The billboards that collapsed on Tuesday were held in place by rusted bolts in concrete foundations that could be scraped away by hand following the accident.
Chan Nat, assistant to Chroy Changvar commune chief Pich Saroeun, said Moon Media had arranged for compensation for the injured woman and the owners of the damaged homes, though he was unsure of the amount provided.
In addition to their signs on Chroy Changvar, Moon Media is responsible for a number of other billboards throughout the capital and in the surrounding provinces, including one located near Phnom Penh International Airport on Pochentong Boulevard and another at the roundabout on Street 289 in Tuol Kork district.
A receptionist at the Moon Media offices in the capital’s Canadia Tower said yesterday that the company’s manager was unavailable for comment. As the woman spoke with a reporter, another staff member called down the hallway: “Don’t talk!”
ADDITIONAL REPORTING BY JAMES O’TOOLE
Posted by CAAI News Media at 7:11 am