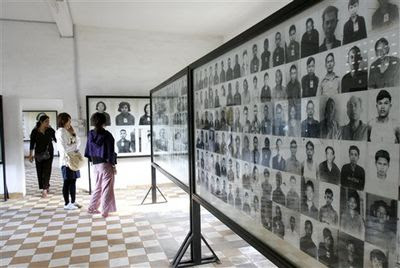 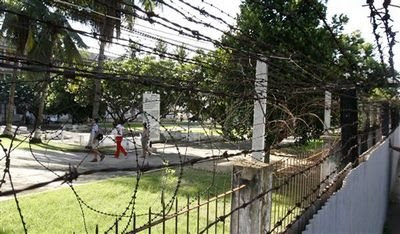 PHNOM PENH, CAMBODIA: Newly analyzed documents indicate that as many as 177 prisoners were released from a notorious Khmer Rouge torture center where it was previously believed that there were only 14 survivors, Cambodian researchers said.

However, at least 100 of those found to have been released from S-21 prison were Khmer Rouge soldiers taken to the facility and released after only three days. It was not immediately clear why they were detained there.

The prison in Phnom Penh was the largest prison facility run by the Khmer Rouge when they were in power in the late 1970s. It was a highly secretive center where thousands of supposed enemies of the regime were tortured before being executed.

But a prison record The Associated Press obtained from the Documentation Center of Cambodia, an independent group researching the Khmer Rouge crimes, shows the names of 100 former Khmer Rouge soldiers aged 17 to 38 who were brought to the prison on 23 Nov, 1977, and released three days later. The record did not give the reason for their arrest or release.

Prisoners at S-21 were usually held for weeks and months for grueling interrogations before they were taken out for execution. Many of the prison's population included Khmer Rouge members who were arrested and killed in the regime's internal purges of its own ranks.

Youk Chhang, director of the center, said his group's findings proved that the long-held belief that no one had ever been released from S-21 and that only 14 had survived their time there was inaccurate.

"Research shows that people were released, so for public knowledge, it's important for the Cambodians, for the (Khmer Rouge) survivors to understand that," he said late Thursday (28 Aug).

He said the enormous scale of the Khmer Rouge killings and other atrocities may have made it easy for historians, scholars and the public at large to overlook the records.

"That's why this detail didn't come out," he said late Thursday. "But to understand the whole history, you have to look at both sides of what happened."

The prison is the focal point of the investigation into alleged atrocities for which its former director, Kaing Guek Eav, also known as Duch, has been indicted to stand trial by a U.N.-assisted genocide tribunal.

Concluding their yearlong probe into Duch's case early this month, the tribunal's judges stated that the vast majority of evidence showed that no prisoners had been released from S-21.

"This is confirmed by testimony that prisoners brought to S-21 by mistake were executed in order to ensure secrecy and security," they said in their indictment.

The judges said more than 12,380 prisoners were executed or died from inhumane treatment at the prison, a number lower than the 16,000 previously estimated by genocide researchers.

"The facility served primarily as an anteroom to death," David Chandler, an American scholar, wrote in his book "Voices from S-21." He, too, said no one had been released from the prison.

Youk Chhang said his group found other records that indicate another 77 inmates had been released from S-21. He said the records have been around for the past 30 years but had been largely overlooked by the public and scholars.

Dara P. Vanthan, the group's senior researcher, said his team determined that one of the inmates on the list is still alive but he has yet to meet with him.

"Many other families did not even know their loved ones were released and today still do not know where they are, dead or alive," he said.