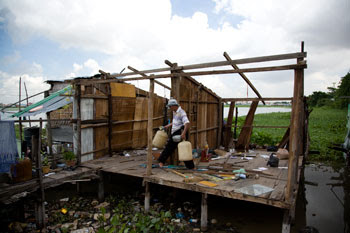 NICOLAS AXLEROD; A Boeung Kak resident dismantles his house Thursday as the water level on the lake started to rise.
The Phnom Penh Post

DISGRUNTLED Boeung Kak residents will march on City Hall next week to demand that the municipality halt a reclamation project that is driving them from their homes, one resident said Thursday as others began tearing down their homes and leaving the future construction site.

A developer on Tuesday began pumping sand and water into the lake, which will be filled in over the next year to make way for a 133-hectare residential and commercial complex.

Thousands of families will be affected by the development, which has been condemned as illegal by rights groups.

Noun Thol, who faces eviction, was collecting thumbprints from other affected residents and by Thursday afternoon had 40 other families on his petition.

"We are planning to take this case to court. We will also march from Boeung Kak to City Hall demanding that the government halt the pumping of sand into the lake. If we don't get a solution, we will seek help from Prime Minister Hun Sen," Noun Thoul said, explaining that he thought that more people would join his effort as anger over the development rose.

"The residents must demand compensation," Noun Thol said, adding that the water levels have risen since the pumping began as tonnes of sand settle onto the lake bottom.

Am Sam Ath, monitoring supervisor for Licadho, said that he has not heard of any Boeung Kak families being compensated for their lost homes. "Compensation should have been made before filling in of the lake began," he said. "The pumping of sand is an act of intimidation to get the residents to leave Boeung Kak while they have not yet agreed to the nature and amount of compensation.

He declined comment on how many residents had received compensation but said around 500 families have agreed to "deal" with the municipality.
Posted by CAAI News Media at 7:37 am