On the job: women workers are changing the employment sector 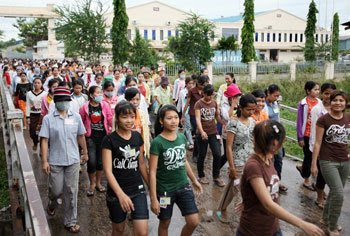 More then ever, Cambodian women are working outside the home, but they need better education and job opportunities to bring their full potential to the Kingdom’s labour force

WOMEN are cloth, men are gold. This traditional Khmer saying is quoted by many studies on gender in Cambodia as emblematic of the different value accorded to men and women in this country of 14 million.

But it takes on a different perspective in Choam Chao district and other areas of Phnom Penh, the heart of the country's garment industry.

These women are part of a major shift in the Cambodian economy over the last decade as employment opportunities slowly move from agriculture to new industries such as services, garment export and construction. Cambodia's women are at the forefront of this transition.

According to the soon to be released Cambodia Gender Assessment (CGA), produced by the Ministry of Women's Affairs, Cambodia's female labour force participation rate is high by regional standards, at 71 percent of the working age population over 15 years of age. This is compared to 64 percent in Thailand, 56 percent in Laos and 87 percent in Vietnam.


" The challenge cambodian women face is not just to access employment, but decent, better paying employment. "

"More than 50 percent of the active female population contribute to the economy," said Dr Ing Kantha Phavi, Minister for Women's Affairs. "The problem is that this [contribution] is still mainly in the informal sector.

"The challenge Cambodian women face is not just to access employment, but decent, better-paying employment.

"While the majority - 83 percent - remain self-employed or unpaid family workers, new employment opportunities for women have opened up, particularly in the garment industry, which accounted for 1.4 percent of total female employment in 1998, rising to 5.5 percent in 2004.

This is part of what many believe has been a gradual positive shift in the situation of Cambodian women over the last decade.

Observers believe much of this progress is the result of sustained, if highly uneven, economic growth over the last few years.

But "significant traditional inequalities persist and new ones are emerging", said the Bank, reinforced by lower standards of education and prevailing attitudes regarding what are "appropriate" occupations for women.

The plight of the garment sector illustrates the broader challenge in creating sufficient employment for Cambodia's rapidly growing labour force.

According to the CGA, approximately 62 percent of the total population and 44 percent of the labour force is under 25 years of age. Of this group 55 percent are women.

Women on the move

Approximately 90 percent of employees in the garment industry are women.

Despite maturing since the 1990s, the sector remains plagued by lower levels of productivity than its key competitors. The largely untrained female workforce is overseen by mainly foreign middle managers.

The recession in the US - the market for 70 percent of Cambodia's garment exports - is only one of many problems. Others include skyrocketing power prices, poor infrastructure and high compliance costs.

In developing countries like Cambodia, the garment sector often kick-starts industrialisation and is the precursor to the arrival of other manufacturing such as food processing, before itself relocating to other, lower-cost countries.

Even a minor downturn would have major economic implications.

"If textiles goes, you'll have 300,000 people employed today on the road tomorrow, not to mention supporting businesses large and small, including mine, that would also be in trouble," said Paul Thomas, director of the freight company Flow Forwarding Cambodia.

Some estimate up to a million people are either directly employed in the industry or depend on the pay packets of those who are.

According to Thomas, the government has given little thought to investment in alternative industry in Cambodia beyond garments and agriculture that could provide sustainable employment opportunities."

No work has been done on paving the way and targeting what investment they want," he said.

"To raise their participation in formal employment and decision-making institutions women need skills and information about how markets and the law function," said Ing Kantha Phavi.

For Chea Vannath, a regular commentator on social and political affairs, women are already heavily represented in the informal sector but increasing their participation in professional jobs will not happen "until we have things like adequate childcare facilities, care for older people and salaries that keep up with the cost of living".

Two of the most significant barriers to increasing women's participation in the workforce are their education and health status.

While Ing Kantha Phavi maintained the government had made progress, the CGA said Cambodia continues to have some of the weakest health indicators in the region.

More immediate and obvious implications for the future employment and earning capacity of women is their educational status.

The Cambodian government is committed to increasing education opportunities for women at all levels, from primary school to university, during the next five-year mandate," said Ing Kantha Phavi, adding that vocational training was a particular focus.

In the absence of job opportunities in Cambodia, increasing numbers of Khmer women are choosing to work overseas, mainly in Thailand, Malaysia and South Korea.

"We are not sure about the exact numbers but they are significant," said Ing Kantha Phavi. "Although we are concerned about the conditions some of these women face overseas, we [the government] encourage labour migration due to the level of local unemployment." ISP NEWS
Posted by CAAI News Media at 12:04 am