Thailand, Cambodia agree to step up marking of border 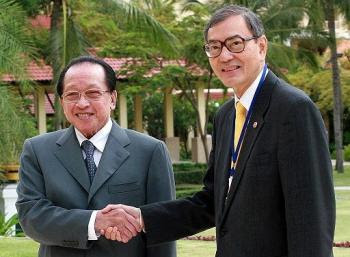 HUA HIN, Thailand (AFP) — Foreign ministers from Cambodia and Thailand said Tuesday they have agreed to step up efforts to mark the border around a disputed temple that has been the scene of a military standoff.

At the weekend, up to 1,000 Cambodian and Thai troops pulled back from a small patch of disputed land near Cambodia's 11th-century Preah Vihear temple, suggesting that an end to the month-long military stand-off could be near.

Twenty troops from both sides are stationed at a small pagoda in the contentious border area, while 40 Cambodian and Thai solders remain nearby.

After a day of talks between Thai Foreign Minister Tej Bunnag and his Cambodian counterpart Hor Namhong, the two sides said in a statement that a border committee would meet in October to step up efforts to draw the boundary around the temple.

They also said military officials would meet on August 29 to discuss a further pullback of troops.
Cambodia had asked the UN Security Council to consider the standoff that erupted last month, but Hor Namhong said that request would likely be withdrawn.

"I think the removal of this issue from before the UN Security Council will take place as soon as possible," he told reporters, but said he had yet to consult his government on the matter.

"The two countries will solve the problem peacefully, in friendship and under the law," he said after the talks in the Thai beach resort town of Hua Hin.

Once both countries remove all their soldiers from the ruins, he said Cambodia would station only police at the temple and the border crossing.

Relations between the neighbours flared up last month after Preah Vihear was awarded world heritage status by the UN cultural body UNESCO, angering nationalists in Thailand who still claim ownership of the ancient Khmer temple.

On July 15, Cambodia arrested three Thai protesters for illegally crossing the border to try to reach the temple, sparking the deployment of troops from both sides on the tiny patch of disputed land near Preah Vihear.

The International Court of Justice ruled in 1962 that the Preah Vihear temple belongs to Cambodia, but surrounding land remains in dispute.

The Cambodian-Thai border has never been fully demarcated, in part because it is littered with landmines left over from decades of war in Cambodia.
Posted by CAAI News Media at 7:51 am