Security is no laughing matter at national Assembly 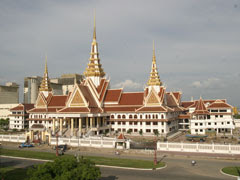 It has become very difficult to sneak into the National Assembly. A new security device will change the habits of the thousand employees of the lower house. “The aim is to strengthen overall security” said a staff member following an inter-branch meeting.

This security device installation, the second in the lower house, occurred just before the start of the fourth legislature, planned for September 24 to be presided over by King Norodom Sihamoni. “Everything is set for the first session, security as much as the rest.” asserted the general secretary of the Assembly, Léng Péng Long. He also said that this second device will be in constant operation.

The government of Vietnam gave the first security detector installed after the inauguration of the new Assembly. It is only used during sessions. Usually MPs use the secure access whereas staff favour the smaller entrances located between the buildings in order to access their offices faster.

Normally, the security forces in charge of controlling the Assembly entrance only search visitors. Staff members, wearing their badges, may pass through the security gate without being stopped.
Posted by CAAI News Media at 8:39 pm