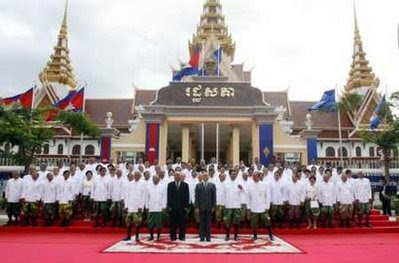 During the opening ceremony, King Norodom Sihamoni hailed the session as a " new opportunity" for lawmakers to work for the development of the Southeast Asian nation, urging them to build "social justice."

Members of parliament were due to be sworn in at the royal palace later in the day, and parliament was scheduled to formally elect its president and Hun Sen's new government Thursday.

"This is a symbol that we will continue the development of the country for five years more," Hun Sen told reporters after the session.

"From now on, I will not allow the small-voice parties to hold the majority- voice party as hostage," he added.

His ruling Cambodian People's Party took 90 seats of the 123 up for grabs in the July 27 ballot, while the main opposition Sam Rainsy Party, or SRP, received 26 seats.

But the SRP and Human Rights Party, or HRP, which won 3 seats, have disputed the results and said Hun Sen's party got its crushing majority after thousands of people were intentionally left off voter lists.

Both parties had threatened to boycott the first session of the parliament, but SRP decided at the last minute earlier Wednesday to attend the meeting after negotiations between its leader, Sam Rainsy, and Hun Sen.

The HRP's members of parliament didn't attend the opening session.

After the previous general election, in July 2003, the kingdom was plunged into a year of political stalemate as parties wrangled over forming a coalition government.

Hun Sen has been accused of suppressing human rights to secure power, but a booming economy has bolstered his standing in a country struggling to lift itself from the ranks of the world's poorest nations.
Posted by CAAI News Media at 11:05 pm