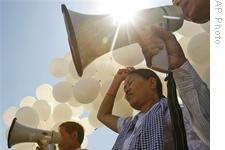 Rights workers held a small ceremony outside the compound of Phnom Penh prison on Tuesday to mark the 1,700th day of incarceration for two “innocent prisoners” accused of the murder of a labor leader in 2004.

Born Samnang, 28, and Sok Samoeun, 40, have been in jail since their arrest in January 2004, following the shooting of labor leader Chea Vichea.

Both men were found guilty of the murder of Chea Vichea and face 20 years in prison each. They were arrested shortly after the killing and were convicted despite the absence of witness testimony or a murder weapon and in the face of convincing alibis for both.

The Appeals Court upheld a guilty verdict in April 2007. The Supreme Court has not set a date to hear their final appeal. A Supreme Court prosecutor said Tuesday he was not aware of any hearing date.

Rong Chhun, president of the Cambodian Federation of Unions, said Tuesday the two men have waited 17 months to have a hearing by the Supreme Court, a violation of a law that requires a hearing within six months of receiving a case.

About 100 people, including family of the accused, gathered outside the prison Tuesday morning to watch the release of 1,700 white balloons into the air above the prison.
Posted by CAAI News Media at 6:30 am