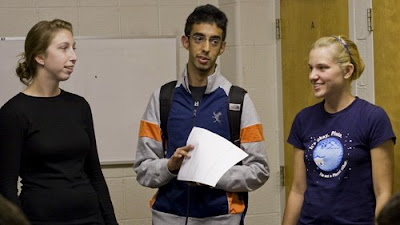 About 20 residents from the living-learning community in Garner Hall, known as LEADS, stood outside of Wal-Mart in Savoy despite the pouring rain, canning to raise money to build schools in Cambodia.

"It was downpouring all morning and the weather was terrible," said Nicholas Heath, freshman in Business.

However, the weather did not suppress the passion of the "LEADSies," which stands for Leadership Education through Academic Development and Service, who refused to move inside. Instead, they canned from 8 a.m. to 5 p.m. Sept. 14 for the project Operation Education.

Kathleen Suwanski, resident advisor at Garner LEADS and junior in LAS, said she was inspired to start the Operation Education project in April when she saw a video on CNN.

The video featured a young girl, Rachel Rosenfeld, who raised money to build a school through the Rural School Project. The school was for young girls in Cambodia who were forced into prostitution, Suwanski added.

Rural School Project is led by the American Assistance for Cambodia and has helped build 400 primary and secondary schools in Cambodia since 1999, according to their Web site.

The LEADS Community Council wants to raise at least $13,000 for this project by the end of this academic year, Suwanski said.

"We thought that if one person can raise that much money, we are 144 LEADSies so we can definitely get involved and help raise money," she said.

Claire Brady, the LEADS program coordinator, said that even though the project will be challenging, residents of LEADS are excited, undeterred and passionate about the project.

"Our goal is not to just stop at $13,000," said Zeeshan Dhanani, resident advisor at Garner LEADS and senior in LAS. "We want to create Operation Education sustainable and get other LLC's on campus involved so we can raise more money."

Students on the LEADS floor at Garner are actively involved in the project.

"It gives you a lot of self-satisfaction to be involved in such a good cause," said Tunde Akinwale, a senior in LAS and resident of LEADS.

Akinwale said he was born and raised in Nigeria and for him to be involved in this project is "very personal" and strives to help in any way he can.

Still, this is just the first fundraising activity the group plans on holding.

"We just started having a loud conversation with each other about what we could do with $13,000 - either we could buy 100 Ugg boots or build a school in Cambodia," said Joseph Thompson-Wilda, junior in LAS and resident of Garner LEADS. "That attracted a lot of people toward us and got them to donate money for the cause."
Posted by CAAI News Media at 9:04 pm