Revisiting the human-rights horror in Cambodia 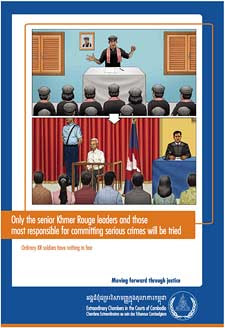 A poster encourages survivors of the Khmer Rouge regime — including many of those who served it — to support the genocide tribunal now under way. 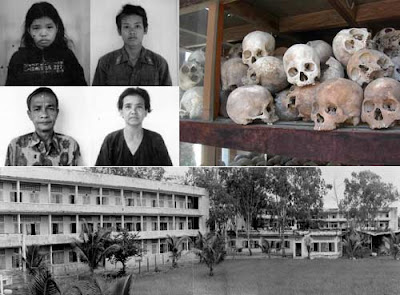 The prison at Tuol Sleng, Cambodia (bottom), a former high school converted to a genocide museum in 1980 (above right), housed thousands of opponents of the Khmer Rouge regime during the 1970s. Inmates of all ages (above left) spent weeks or even months here being tortured to provide “confessions,” following which — if they survived their interrogation — they were executed. (Clockwise: Yale University Cambodian Genocide Program, Adam Carr, Ben Kiernan)

It’s taken this long to bring just five likely Khmer Rouge killers before a tribunal. Wouldn’t it be easier simply to ‘bury the past’ and move on? Sophal Ear isn’t sure

Sophal Ear was an infant when Pol Pot’s murderous Khmer Rouge seized control of Cambodia in April of 1975, plunging the country into a four-year hell in which hundreds of thousands of mostly urban residents (whom the regime dubbed “New People”) were executed and dumped in the infamous “killing fields.” Some 1.5 million more — young Sophal’s father included — died of disease or starvation.

He wasn’t yet 2 when his mother, leveraging her Vietnamese-language skills, fooled cadres on both sides of her homeland’s eastern border into “repatriating” her and her brood to neighboring Vietnam, newly unified under Communist rule after decades of war with the West.

The drama of Ear’s life levels off a bit after that — how could it not? — but the story itself never flags. With the help of a relative living abroad, the family resettled in France in 1978, and finally in Oakland; after graduating from Berkeley High School, he enrolled at UC Berkeley, where he earned a bachelor’s in economics and political science in 1995 and “learned the value of scholarship.”

Following a return to Cambodia in the summer of 1996 — ending a 20-year absence — he was back at Berkeley, where he picked up not one but two master’s degrees (his third is from Princeton) and, in 2006, a Ph.D. in political science. He has consulted for the World Bank, the U.N., and USAID, with missions not only to Cambodia but to East Timor, Algeria, Gaza, and the West Bank, and visited dozens of countries and territories in the guise of tourist and amateur photographer. Last year he joined the faculty of Monterey’s Naval Postgraduate School as an assistant professor in the Department of National Security Affairs.

Like Cambodia itself, Ear today is wrestling with how to move beyond the atrocities committed by the Khmer Rouge during their bloody reign of terror. In a well-attended talk last week in Moses Hall — hosted by the Institute of International Studies and co-sponsored by the campus’s Religion, Politics and Globalization Program, the Human Rights Center, and the Center for Southeast Asia Studies — he traced his interest in the question of Cambodian justice to a lecture he attended at Berkeley as a 14-year-old high-school sophomore. That led to an undergraduate thesis in which he sought to discover why “a generation of Western scholars” — led, notably, by linguist-turned-political-activist Noam Chomsky — seemed so willing “to defend the Khmer Rouge or rationalize their policies” during the 1970s.

“I was completely flabbergasted,” he recalled, “that there were such people.”

What the Khmer Rouge and their apologists billed as a “peasant revolution,” Ear said, was in fact “one of the biggest experiments in social engineering the world has ever seen,” a nightmare in which the Southeast Asian nation’s agrarian-minded rulers “literally killed all the lawyers” (along with others branded as intellectuals), ultimately wiping out as much as one-quarter of the population through a combination of starvation and disease — as in the case of his own father, who succumbed to dysentery — and “taking people away and killing them, as in the case of my wife’s dad.”

“There is not an ability to come to terms with all of that,” he said. Yet Ear, a slight man with an easy charm and a wry smile, evinces no desire for vengeance — though he confesses to anger at Cambodia’s prime minister, Hun Sen, who in 1998 dismissed the idea of bringing the guilty to justice. Putting the Khmer Rouge on trial, announced the longtime leader — a one-time KR member himself who insists he was, like many of those under their rule, merely a soldier — “will not benefit the nation, it will only mean a return to civil war.”

“We should dig a hole,” declared the prime minister, “and bury the past.”

In some respects, said Ear, that is just what is happening. Due largely to the depredations of the 1970s, more than half the Cambodian population is now under 21 years of age, too young to have lived through the heyday of the Khmer Rouge; many college students think the Cambodian holocaust “never happened,” or that it’s “not their problem.” Textbooks, he added, “don’t talk about what happened during that period.”

“In Cambodia,” Ear explained, “people basically survive by not talking about it.”

A number of other factors serve to compound the problems of justice and forgiveness, he observed. After the Vietnamese invaded and threw out the Khmer Rouge in 1979, for example, countless KR village chiefs were killed by villagers in a nationwide fury of retribution, and other top officials fled the country, leaving much of Cambodian society in the hands of lower-level soldiers and functionaries of the hated regime. (Pol Pot, “Brother No. 1,” died in 1998, while Ta Mok, aka “the Butcher,” died awaiting trial in 2006.)

Add to that the fact that Cambodians are overwhelmingly Buddhist — holding to a belief in karma and a sense, as Ear put it, that “justice is already built into the fabric of life” — and the nature of “justice” grows murkier still. Nor is it clear that it makes economic sense to devote limited resources to show trials in a country beset by widespread poverty and food shortages.

Such considerations notwithstanding, a United Nations-sanctioned genocide tribunal last year began hearing evidence and testimony in the case against the first of five defendants deemed “most responsible” for the human-rights crimes of the Khmer Rouge. A decade of delay in launching the tribunal — whose cost is estimated at $50-plus million and counting — speaks to the highly controversial nature of the effort.

In his own conversations with Cambodians, Ear has encountered the full gamut of opinion, from the view of one young woman that “no justice in the world will bring my family back,” through the belief that prosecution is an essential step toward the goal of “true forgiveness,” and on to the lingering desire for vengeance — one Cambodian suggested that the defendants, who “everyone knows” are guilty, “be executed right away” on national television.

And where does he himself come down on the question of justice, forgiveness, and the Khmer Rouge tribunal?

The court, he said, is “the last, best hope we’ll have, as flawed as it is.” Although he and his wife have registered with the victims’ unit, he would have preferred a tribunal modeled on South Africa’s Truth and Reconciliation Commission, which aimed at healing the nation’s wounds by giving victims of apartheid the right to be heard. He fears that Cambodia’s more limited, legalistic approach may lead to neither justice nor forgiveness.

“I certainly am not expecting anything out of this process other than to register a complaint, to say, ‘For the record, this happened,’ ” he explained. “I don’t care what happens after this. But I lodged my complaint, and I don’t want it forgotten.”
Posted by CAAI News Media at 9:59 am