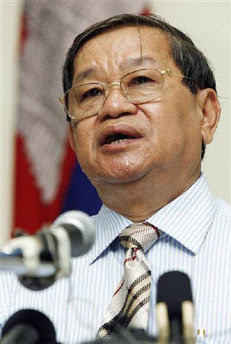 Phnom Penh, Oct 04: Cambodia protested to Thailand on Saturday about a border shooting incident in which three solders were wounded and said in a letter to the Thai Ambassador that such "intentional armed provocation" could lead to conflict.

However, Cambodian Information Minister Khieu Kanharith told a news agency that Phnom Penh had agreed to an investigation at the border into Friday's exchange of fire and Thailand's Foreign Ministry said the situation was calm.

Two Thai soldiers and one Cambodian soldier were injured in what was the first clash in the disputed territory near the 900-year-old Preah Vihear temple since the two countries agreed to pull back in August after a serious confrontation.

Each country has accused the other of encroaching on its territory and said troops from the other side fired first.

Cambodia's Foreign Ministry sent a letter of protest to the Thai Ambassador on Saturday.

"Such armed provocation by Thai soldiers could lead to very grave consequences, including full-scale armed hostility which would adversely affect the present efforts of the two governments to seek a peaceful and amicable solution to the current border problems," the letter seen by a news agency read.

For its part, Thailand's Foreign Ministry said in a statement issued late on Friday that the situation had returned to normal.

The Thai military immediately initiated high-level contact with Cambodian counterparts about the incident.

"The Cambodian side agreed to investigate the matter and reaffirmed that the incident would be contained without any further armed confrontation," the Thai ministry statement said.

"The Cambodian side also affirmed that it would coordinate more closely with the Thai side to prevent any recurrence of similar incidents."

Foreign Ministers of the two countries agreed in July to find a peaceful end to the diplomatic and military spat, centring on 1.8 square miles (4.6 sq km) of scrub near the temple.

Both sides have claimed Preah Vihear for decades. The International Court of Justice awarded it to Cambodia in 1962 and the ruling has rankled in Thailand ever since.

The row earlier this year was sparked by protesters seeking to overthrow the Thai government, who attacked Bangkok's backing of Cambodia's bid to list Preah Vihear as a United Nations World Heritage site.

Political elements on both sides fueled the conflict for their own ends, but tensions eased considerably after Cambodian Prime Minister Hun Sen's victory in a general election in late July in which the temple, and nationalism, featured heavily.