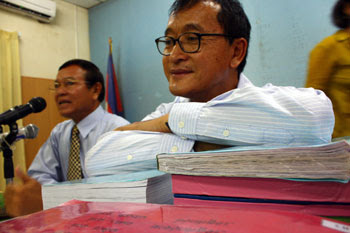 HENG CHIVOAN; Sam Rainsy and Kem Sokha at a press conference immediately after the July election.

Party officials move to quash rumours of a widening rift between the Kingdom's two largest opposition parties, suggesting they plan to fight the 2013 election under a single banner

AN opposition party merger is again in the cards, with officials from the Sam Rainsy Party (SRP) and Human Rights Party (HRP) suggesting the two groups may unite for the 2013 election, despite the collapse of their planned boycott of last month's National Assembly inauguration ceremony.

The SRP pulled out of the Assembly boycott after last-minute talks with government officials, an act that some observers said was evidence that the two parties were pulling in opposite directions.

Speaking to reporters after the ceremony, Prime Minister Hun Sen made suggestions there was dissension in the opposition's ranks. "Sam Rainsy has cheated [HRP president] Kem Sokha," he said.

However, Kem Sokha said the SRP's attendance at the ceremony had not driven a wedge between the two allies. "Making different decisions for the moment will not impact our alliance," he told reporters after a meeting with the SRP last week. "We will still work together and have the goal of working together for the future."

HRP Secretary General Yem Ponhearith added that the two parties, facing a CPP-dominated government for the next five years, would consider merging to consolidate their strength.

"Our alliance is the same as ever," he said. "A merger would become a possibility if the circumstances made it necessary... [and] there might be more chance of success, since it would be easier for people to remember and vote for us."

" A merger would become a possibility if the circumstances made it necessary. "

SRP Deputy Secretary General Mu Sochua agreed that the ties between the parties remained strong. "There is no sign of a division," she said. "We are on a step-by-step road to a merger, and our common goal is to win the 2013 election."

A marriage of inconvenience

Despite all the talk of unity, however, some observers say a merger between the two parties is unlikely to succeed. "They will not be able to effect a successful merger," said Sok Touch, a professor of political science at Khemarak University. "Both parties are too proud, and how will they function when there are two men and both want to sleep in the middle?

"Puthea Hang, executive director of the Neutral and Impartial Committee for Free and Fair Elections, agreed that the question of the new party's leadership could trigger a clash of personalities between Kem Sokha and Sam Rainsy.

"If they want to merge to increase their chance of winning, one leader must stand as No 1 and one [must stand] as No 2. If they take this stance, a merger could be successful, but at the moment I think they are both too proud," he said.

Indeed, relations between the two opposition leaders have been cool since the establishment of the HRP in March 2007.

At the time, Kek Galabru, president of local rights group Licadho, lamented the formation of a new opposition party. "It is a pity. If you have a cake and you begin to split it, you start to have smaller and smaller pieces," she said, adding that "the electoral system.... favours the big parties.

"In response to criticisms at the time that the newly-formed HRP would steal votes from the SRP and damage its chances of success in the 2008 election, Kem Sokha said Sam Rainsy had lost his credibility as an opposition leader.

"I told the SRP of my plan and I explained the model of the kind of party I wanted," he said. "[But] the people do not trust Sam Rainsy any more.... Now [he] has long talks with Hun Sen behind closed doors and there is no transparency."

Sam Rainsy responded by saying: "I don't think it's very important what Kem Sokha said. To respond to such comments will divert attention from more important matters. Why should I respond? I will let the people decide on these matters."

But tensions eased after the July 27 national election, when the HRP, SRP, Funcinpec and the Norodom Ranariddh Party united to reject the provisional election results, which they claimed were manipulated through the illegal amendment of voter lists.
Posted by CAAI News Media at 9:31 am