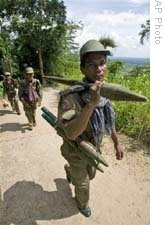 Friday's skirmish was the first since soldiers like this one, photographed in July, took up positions along the Preah Vihear provincial border.
By Kong Sothanarith, VOA Khmer
Original report from Phnom Penh
03 October 2008

At least one Cambodian soldier was injured Friday afternoon in an exchange of gunfire between Thai and Cambodian troops near the Preah Vihear provincial border, in the first reported act of military violence in a prolonged standoff, a military official said.

Thai soldiers fired a grenade at a group of Cambodian soldiers, injuring a Cambodian in the leg, while a Thai soldier was wounded in the abdomen in the return gunfire, according to a reliable military officer in the area, who asked not to be named due to the sensitivity of the issue.

"At 3:35 pm, around 10 [Thai soldiers] entered the Cambodian position, and Cambodian soldiers called to them not to enter, and they did not listen," the officer said. "And then they shot with the M-79 [grenade]."

The soldiers were nearly 200 meters from the Cambodian position on Phnom Troap, more than 1 kilometer from the Preah Vihear temple complex, the officer said.

A report from Ministry of Defense information office obtained by VOA Khmer Friday coroborrated the statements of the military officer and said both sides remained at a standoff at 5 pm.

The exchange of violence, which lasted only moments, was the first reported in an 11-week military standoff over Preah Vihear temple. Officials had cautioned that prolonged proximity between the troops could end in bloodshed.

Both Cambodian and Thai officials have said they are committed to peaceful resolution of the impasse, which began following the inscription of the temple, which abuts a disputed border area, onto a Unesco World Heritage list in July.

Defense Minister Tea Banh could not be reached for comment, and a person answering the phone of the Thai Embassy's first secretary said he was unavailable.
Posted by CAAI News Media at 4:54 pm