First trial of KRouge leader delayed to next year: court 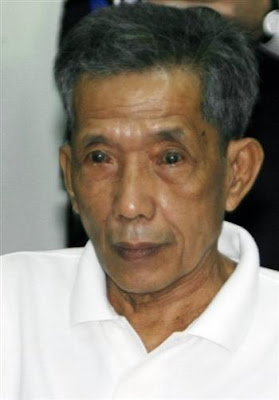 Kaing Guek Eav was the first Khmer Rouge leader to stand trial for the atrocities committed during 1975-79
PHNOM PENH (AFP) — Cambodia's UN-backed genocide tribunal said Thursday that the long-awaited first trial of Khmer Rouge cadres would be delayed until next year because of legal hold-ups.

Five senior Khmer Rouge leaders, mostly in their 70s and 80s, remain in detention awaiting trial for their alleged roles in the 1975-79 atrocities.

Court officials had hoped that the hearing would start this month, but prosecutors appealed Duch's indictment, saying it failed to go far enough and portray a "full and truthful account" of his crimes.

The court said in a statement that appeals and other necessary legal procedures would delay the trial until next year.

"Successfully conducting trials of this significance is a complex process. The court recognizes that it can be frustrating for the millions who have been waiting for decades to see justice done," the court said.

"Nevertheless, each step of the legal process must be followed carefully and conducted in line with the highest standards of justice," it said.

The court added that a trial management meeting would be convened by mid-January 2009, where a date for the first hearing would be set.

Up to two million people died of starvation, overwork or execution under the the Khmer Rouge, which dismantled modern Cambodian society in its effort to forge a radical agrarian utopia.

Established in 2006 after nearly a decade of negotiations between Cambodia and the UN, the long-stalled tribunal seeks to prosecute crimes committed 30 years ago by senior Khmer Rouge leaders.
Posted by CAAI News Media at 7:33 am