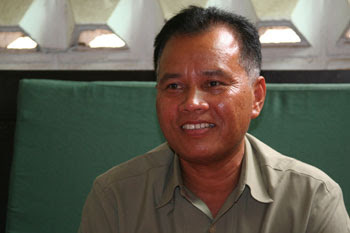 TWO members of the opposition Human Rights Party and a third from the Norodom Ranariddh Party announced their defection to the Cambodian People's Party on Tuesday, just hours after HRP founding member Keo Remy embraced the ruling party.

Reach Samrach, chief of finance for the HRP, and his deputy, Lim Rathanak, told the Post Wednesday they agreed to defect to the CPP without conditions or expectations.

Keo Sothea, an NRP stalwart and publisher of the Voice of Khmer Youth newspaper, also announced his allegiance to the CPP.

Reach Samrach said that he submitted a letter to CPP leaders seeking permission to join the party, but that he has yet to receive a response.

"I cannot walk contrary to the CPP leaders when they have received so much support from the Cambodian people," he said.

Lim Rathanak told the Post he also defected without conditions and did not seek a position in the new government.

Meanwhile, Keo Sothea said Wednesday he could not continue as a member of the NRP because it would no longer have any political clout following last week's resignation of its leader, Prince Norodom Ranariddh.

"After [Prince Ranariddh] quit politics, I saw that the NRP would be weak, so I could not stay," he said.Senate Vice Chairman Tep Ngorn told the Post he will preside over a ceremony today to formally recognise the defectors as CPP members.

In the run-up to the July 27 national polls, the opposition suffered unprecedented defections to the CPP, which won 90 of the National Assembly's 123 seats.
Posted by CAAI News Media at 10:32 am