An odyssey of despair and hope 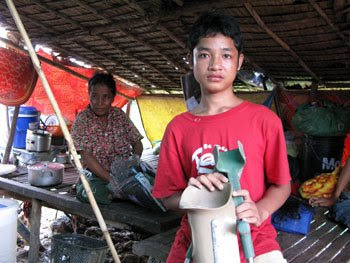 ANNE-LAURE POREE; Nuon Ros with his crutches and leg brace in the small house he shares with his mother and siblings in Andong.
THE PHNOM PENH POST

A young man's journey through family upheaval, grinding poverty and a brutal assault that left him permanently disabled ends in renewed faith in a better future for his family

NUON Ros, 18, lives down a narrow, dirty lane between two thatched houses in Andong, a "village" established by the government for some 1,300 families evicted from the Sambok Chap slum in downtown Phnom Penh.

Andong, situated on a low-lying rice field 20 kilometres outside the capital, is little more than a makeshift collection of shacks prone to flooding and plagued by disease during the rainy season.

Families there live on 4-metre-by-6-metre plots, and only about 400 residents have been given legal land titles, making the prospect of another forced relocation likely for most.

Nuon Ros lives in a fragile shelter with his mother, who was disabled in an accident a few years before and is now unable to work.

She nonetheless must care for her nine other children and one grandchild, abandoned by its father.

When meals are available, they consist most frequently of rice porridge, bobor. The family eats rice on special occasions, and fish or meat almost never. They occasionally supplement their diet with vegetables found growing in the wild.

Nuon Ros and his family can sometimes earn as much as 4,000 riels a day carrying water to other residents of Andong. His father - an alcoholic - abandoned the family years earlier.

" I REMEMBER THE SOUND OF THE BONE SNAPPING. "

With so few prospects for the future, Nuon Ros's unquenchable hope for a better life strikes a dissonant note - more so considering the harrowing assault by security officials that left him permanently disfigured.

Nuon Ros had returned to Phnom Penh in 2007 to participate in an outdoor performance of the Fine Arts Association of Andong during that year's Water Festival.

After the show, the performers decided to sleep at the site. Nuon Ros went for a walk before going to bed. About 20 minutes later, a white car pulled up and two uniformed men abducted him without a word. Ten other youths were captured by security officials, and all of the detained were sent to Kob Sraeu Centre, a holding facility primarily for drug users. They were later transferred to Chaom Chau Centre near Phnom Penh International Airport - a place where even hardened criminals fear to go.

Nuon Ros was accused of drug use and told he would remain at the centre for three months. During Nuon Ros's detention, his mother tried frantically to find him.

"One week after our arrival at Chaom Chau Centre, my mother visited me with the mother of another boy arrested with me," Nuon Ros said. "They brought us bread. But the other boy took advantage of an open door and escaped. The officers could not find him, so they interrogated me to see if I knew about his plan to escape." 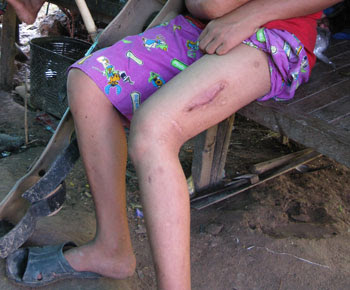 Nuon Ros said he knew nothing about a plan for escape. The officers thought otherwise and beat him several times with a bamboo stick. Three days later, one of his legs began to swell.

His mother finally acquired letters from local authorities and the head of the Fine Arts Association asserting that he was a member of the Andong performance group. Nuon Ros was released, but not before he was made to affix his thumbprint on a document swearing that he would never use drugs again.

At home, his leg swelled to nearly double its normal size. And then one evening he stumbled and fell.

"I remember the sound of the bone snapping," he said. The leg was turned in the wrong direction, with the heel where the toes should be.

Despite his unendurable pain, Nuon Ros's mother could not afford to bring him to hospital. She relied instead on a local practitioner of traditional Khmer medicine, who tried to set the bone and bound the leg with bamboo.

By chance, a doctor from the local rights group Licadho saw his condition. He spent two hours trying to persuade the boy's mother to let him be relocated to a hospital. She was concerned that doctors would try to amputate her son's leg.

Licadho's Dr Lay Rapo finally succeeded and made arrangements for surgery at a Phnom Penh hospital.

After two days of antibiotics treatment, Nuon Ros spit up a 20-centimetre worm and required three blood transfusions prior to surgery.

Doctors tried three times to surgically repair the leg, but a massive infection and the thinness of the bones made their task impossible. Instead they used a weight-and-pulley system to extend the leg in small increments until it returned to the correct position. When the bones began to mend, Nuon Ros was moved to a rehabilitation centre for physical therapy.

It took nine months after his savage beating before Nuon Ros could return home in good health, but with a left leg a few inches shorter than it used to be and the need for a crutch and a leg brace.

But he also came back with a new sense of calm and the strength of a survivor. He has now entered a vocational training school in Battambang with the aim of supporting his family. "After studying mechanics, I want to work and to study Khmer. I really want to know how to read," he said shyly.

Nuon Ros's wishes remain simple: "I want my family to get all it needs and have enough to eat."