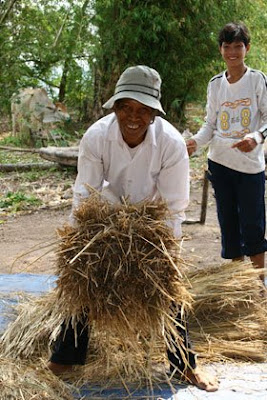 Photo by: TRACEY SHELTON
The government hopes to add value to the rice sector by encouraging more in-country rice processing, rather than exporting raw goods.
THE PHNOM PENH POST

Government hopes the funds will allow producers to increase their stocks of unprocessed rice, which would cut rice smuggling to neighbouring Vietnam

THE Rural Development Bank has offered a US$20 million loan to Cambodia's largest rice-milling association in an effort to cut the flow of unmilled rice to neighbouring countries during next month's harvest season, bank officials say.

Sun Kunthor, director of the RDB, said the loan, which the millers association says constitutes only 20 percent of needed funds, will allow the association to purchase more local rice and curtail smuggling, particularly to Vietnamese traders.

"We hope the loan, which has a low six percent interest rate, will encourage local rice millers to keep more of the rice harvest in Cambodia instead of allowing it to be traded across the border," he said.

Cambodia has about 2.5 million hectares of rice paddy, with an expected annual yield of about seven million tonnes in 2008, say government estimates.

"The $20 million loan will only buy about 100,000 tonnes of rice. This is small compared to the amount being exported. However, we consider this an important loan as it will help reduce rice husk exports and increase local stocks," he said.

Rice husks are an emerging value-added product used in the manufacturing of food products and fertilisers, a sector that he said was a major employer in rural Cambodia.

"I think the loan will help keep local rice prices stable," he said, adding that the government should monitor funds to ensure they are being used properly.
Posted by CAAI News Media at 12:15 am