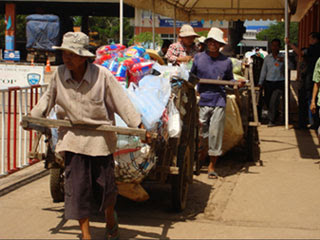 Gen. Viboonsak, the regional army commander for the northeast told Modernine TV that the meeting to be held at the operational level Thursday near the disputed temple will discuss troop deployments by the two countries for the satisfaction of both sides to avoid any problem that might occur.

Information discussed will be presented to a higher level meeting, he said, while reaffirming the Thai military's policy to continue a presence in all of Thailand's border areas.

The border tension escalated on Tuesday following Cambodian Prime Minister Hun Sen's ultimatum to Thailand to withdraw its troops from a disputed area near the ancient Khmer Preah Vihear temple by midday Tuesday.

While Cambodia said Thai troops had retreated ahead of the deadline, the Thai side denied that any troops had been pulled back.

Villagers in seven villages in Si Sa Ket's Kantharalak district have been prepared for possible evacuation if the border tension develops into military action.

Thai and Cambodian travellers are still at Surin's Chong Jom border pass in Surin but some Cambodian traders closed their shops and returned their goods across the border. However, all shops in Cambodian's Orsamet are closed.

Meanwhile, the two Thai-Cambodian border markets in Chanthaburi's Soi Dao district are quiet with few Cambodian traders. Chairman of the local entrepreneurs club at the Thai- Cambodian border in Chanthaburi Sombat Chuengtrakul admitted the border dispute and negative rumours about it had caused more than half the two markets' shops, stalls and kiosks to close.

However, the atmosphere at the Thai-Cambodian border of Sa Kaeo's Aranyaprathet district was normal after the border crossing opened at 7am. As on any day, many Cambodian traders from Poipet were waiting to step into Thailand to do business at Rong Klua market. (TNA)
Posted by CAAI News Media at 11:20 pm