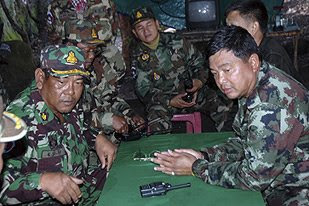 Thailand has promised "peaceful negotiations" with Cambodia over a tense border dispute.
But the Thai government also deployed more troops to the border territory near an ancient temple claimed by both sides, and said it was ready to respond militarily if attacked after Cambodia issued an ultimatum for Thai troops to withdraw by midday Tuesday.
Somchai Wongsawat, the Thai prime minister, gave assurances that Thailand would not resort to violence and talks were to continue on Wednesday.
'Peaceful means'
"If there is a problem, we will use peaceful means with an emphasis on negotiations," he said. 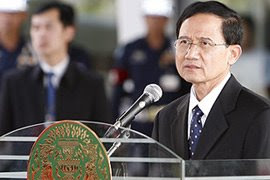 The two countries disagreed on what happened and who backed down in their standoff on Tuesday.

On Tuesday morning Hun Sen, the Cambodian prime minister, said Thai troops had tried to advance into Cambodia's territory but that Cambodian soldiers had "waved them back".

"They must withdraw," he had told an economic conference in Phnom Penh, giving a noon deadline and warning of "armed clashes" if Thai troops continued to "trespass" across the border.

Brigadier-General Yim Pim, a Cambodian army commander, later said all Thai troops had retreated about 90 minutes before the deadline and returned to camp, saying "the tense situation has now eased".

A Thai army spokesman initially denied the Cambodian general's claim and Somchai said his country's troops had been on their own territory all along.

But the Thai army's regional commander, General Viboonsak Neepan, later said "troops on both sides have retreated slightly", though they remained "about 100 metres apart".

Viboonsak said more troops were moved to a nearby area late on Tuesday, but strictly as a defensive measure.

"We have sent more troops to be stationed near the area but only enough to resist [an attack]. We will not attack first," he said.

At the centre of the dispute is Preah Vihear, a 11th century Hindu temple which the UN listed as a World Heritage Site in July, a ruling that re-ignited a decades-old feud.

Both countries have long claimed the temple but the World Court awarded it to Cambodia in 1962, and sovereignty over parts of the surrounding land remains unresolved.
Posted by CAAI News Media at 6:04 pm