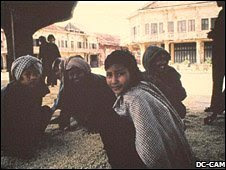 Gunnar Bergstrom has the slightly bemused air of a man who has just realised the joke is on him.

Finding himself back in a much changed Phnom Penh after a 30 year absence probably has a lot to do with it.

But repeatedly explaining how his younger self was conned must surely have had an impact as well.

This former Khmer Rouge supporter is here on a mission of redemption and reconciliation.
In just two days he has already visited genocide memorials and former torture centres, faced a grilling on Cambodian television, and a seminar audience full of survivors of the Pol Pot era.

Over the next two weeks, he will take a similar message of contrition to the provinces.

It might not be possible to turn back the clock, but Mr Bergstrom is at least going to try to explain why he and his colleagues in the Swedish Cambodian Friendship Association not only sympathised with the Khmer Rouge, but enjoyed the organisation's hospitality on a two-week visit in 1978 - even dining at the same table as leader Pol Pot. 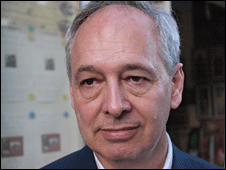 " We didn't want to believe that the liberators had become oppressors "
"I was at that time a member of a friendship association which was a remnant of the anti-Vietnam/Cambodia War movement in Sweden, which was very strong in the Western world," Mr Bergstrom told the BBC.

"Of course we didn't want to believe that the liberators had become oppressors."

The Swedish group were far from unique in their long-distance support of communist groups in Cambodia, Vietnam and Laos.

And they were not the only ones who were reluctant to accept that the supposed "good guys" who had fought against US-backed forces might possess serious flaws of their own.

The poet and foreign correspondent James Fenton faced a similar dilemma when he arrived in Cambodia shortly before the shambolic Lon Nol regime fell to the merciless, black-clad Khmer Rouge.

"I admired the Vietcong and, by extension, the Khmer Rouge," he writes in All The Wrong Places. "The theory was, and is, that where a genuine movement of national liberation was fighting against imperialism, it received our unconditional support."

With first-hand experience of the situation, the reporter soon came to fear the Khmer Rouge in the same way most Cambodians would.

But once Pol Pot and his men were in power, they closed the country to foreign journalists, so long-distance admirers like Mr Bergstrom knew little of the true picture. 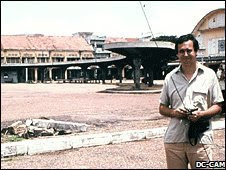 Gunnar Bergstrom accepted a rare invitation to tour Cambodia in 1978
"We thought that the movement, the revolution here, was an example to the third world," he says now.

"They didn't take foreign aid, they relied on their own forces, no money, egalitarian… 'The atrocity stories cannot be true totally anyway; probably just slander.' That maybe was the picture in 1978."

So the Swedish group were happy to accept a rare invitation to tour Cambodia.

Their movements were closely controlled, and sightseeing opportunities put forward only the best face of the revolution.

Modern rubber factories, efficient collective farms and smiling workers were all presented for the delegation's edification.

Mr Bergstrom says that even then he knew that everything could not be as it appeared, that all the refugee stories about atrocities could not be lies, but he admits to suppressing his doubts.

"I was crazy enough to support the Khmer Rouge when I came home, and I quieted that voice," he sighs.

Within months of his visit, Vietnamese-backed forces ousted the Khmer Rouge, and the full horror of the Pol Pot era finally became public knowledge.

Mr Bergstrom's support of the revolution came to an abrupt halt.

Now the Documentation Centre of Cambodia, which has been gathering evidence for the Khmer Rouge Tribunal, has arranged for the former Swedish solidarity group member to return. 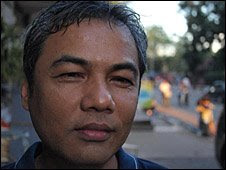 " People say, 'Now he's apologised, we accept it.' It's important for many people to hear such things "
The centre's director, Youk Chhang, hopes that Mr Bergstrom's latest tour will help the reconciliation process.

"People say, 'We were right - foreigners were here to help the Khmer Rouge and now he's apologised, we accept it.' It's important for many people to hear such things."

It is important for Mr Bergstrom to say it as well.

He has donated his photos from the 1978 trip to the centre, and they will be displayed permanently at the Tuol Sleng genocide museum.

Some have a third caption: "Forbidden Thought at the Time".

The "quieted voice" is no longer silent.
Posted by CAAI News Media at 7:44 pm