Former Rebels Could Confront Each Other 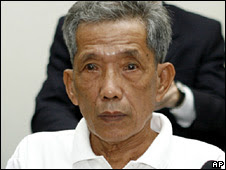 Investigating judges of the Khmer Rouge tribunal hope to hold a nonpublic hearing wherein two former regime leaders will confront each other, a judge said.

The two will need to give concurrent testimony over accusations made by Kaing Kek Iev, better known as Duch, that Nuon Chea masterminded the killings of Tuol Sleng, where at least 12,000 people were interned before being executed, sources said.

“We need to make it transparent, as one has accused the other,” You Bunleng said. He would not confirm the nature of the accusations or the date of the inquiry.

Sources said the hearing could be held this weekend.

Duch defense lawyer Ka Savuth confirmed a hearing was planned, but he declined to give any details.

Nuon Chea’s defender, Son Arun, said he was consulting with this international counterpart and client about the judges’ plan, but he declined to elaborate.

If either defendant refuses a confrontation, “I could not force them,” You Bunleng said.

Duch, who faces charges of war crimes and crimes against humanity, is expected to be the first of five leaders to face trial, early in 2009. He was the direct subordinate of Son Sen, the Khmer Rouge’s minister of defense, who died in Anlong Veng in 1997 and reported to Nuon Chea.

Nuon Chea was Pol Pot’s lieutenant, and went by the name “Brother No. 2.”
Posted by CAAI News Media at 7:03 am