Restaurants with a view offer an escape from busy capital 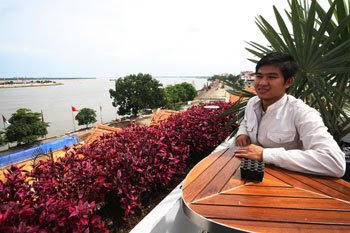 DEVELOPMENT is booming in Phnom Penh, and with numerous multi-storey skyscrapers slated to be finished within a few years, the current skyline will soon be radically transformed.

Fortunately, there are still a few spots around the city that offer unfettered views of Cambodia's capital as it is for the time being, as well as refreshing food and drinks, and a relaxing atmosphere away from the chaos and cacophony that are the inevitable accompaniment to a building boom on this scale.

Inside Master Grill, and up a flight of winding stairs on the sixth floor is the Sorya branch of Master Suki Soup. Housed in the upper dome that tops Sorya, the circular-shaped restaurant offers 10 plush booths that ring the massive floor.

Each table has its own built-in, gas-fuelled burner where diners can create their own gourmet feasts, from soups to a hearty barbecue of meat and veggies.

The menu is made up of small, reasonably priced dishes of vegetables, sliced meat and seafood for guests to pick and choose from. US$10 is sufficient for a huge spread for two, including drinks.

But it is the views here that are priceless. From the vast wall of windows, the whole of Central Market is visible, spread out like a futuristic spaceship, with ant-like vendors and shoppers doing brisk trade amongst the throngs of motorbikes far below.

To the left is Boeung Kak Lake, with its drifting patterns of water lilies, and to the right, the mighty Mekong and Tonle Sap rivers, and the majestic spires of the Royal Palace glinting in the sunlight. Just off in the distance is the white-tipped stupa of Wat Phnom, jutting out above a cluster of lush, green trees.

Not quite as tall, but with equally beatific views, is the Grand View Guesthouse and Restaurant on Boeung Kak lake. Despite the average-looking exterior and run-of-the-mill backpacker bar and internet cafe below, the Grand View has an incredibly scenic rooftop restaurant high above on the sixth floor.

The menu here is standard basic traveller fare: pizzas, pastas, sandwiches, and regional Khmer and Thai dishes. But the large, open windows bring in fresh breezes, and the height allows for unobstructed views of the entire lakeside area, including the glittering dome of the local mosque.

A relatively new addition to the riverside resto-bar scene is the posh and elegant Chow, which offers up picturesque scenery as well as excellent cuisine and beverages from its rooftop bar and patio, overlooking the confluence of the Mekong, Bassac and Tonle Sap rivers.

Located atop the swank, yet eco-friendly boutique hotel The Quay, this is the perfect venue to watch the slow-moving fishing boats and barges drift lazily along the water.

Prices here reflect the upscale atmosphere, with cocktails starting at the $5 mark and main dishes ranging from $9 up to $40.

Another place that deserves a mention for its captivating scenery is Maxine's Pub, otherwise known as Snow's bar.

This waterfront haunt has long been an expat staple in Phnom Penh and is one of the most atmospheric places to watch the sun set.

Located on the opposite side of the Mekong, over the Japanese bridge, Maxine's is housed in an old, traditional wooden home leaning, somewhat precariously, over the river's edge.

Inside, the dusky blue walls are decorated with brightly painted masks of Hindu and Buddhist gods, colourful tile mosaics and tiny cowbells from the countryside.

Best of all is the long wooden deck overlooking the river where visitors can sit back and watch the sun dip down over the bridge, as fishing boats glide by and distant lights begin to twinkle around the Royal Palace and Wat Phnom.

Amidst this pictorial, laid back locale, it is easy to forget that one day in the not so distant future views like these might be a thing of the past.
Posted by CAAI News Media at 6:39 am