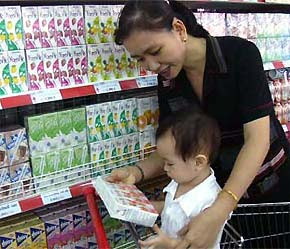 Biti’s footwear, Vinamilk dairy products and Vissan processed food have become the choice of Cambodian consumers instead of Chinese and Thai goods.
06/02/2009

VietNamNet Bridge – Neighbouring Cambodia has emerged as a potential market for Vietnamese products, according to the Industry and Trade Ministry.

The ministry said that there is a growing demand for Vietnamese products, mainly in steel, fertilizer, insecticides, pharmaceuticals, plastics, garment and textiles.

Biti’s footwear, Vinamilk dairy products and Vissan processed food have become the choice of Cambodian consumers instead of Chinese and Thai goods.

Moreover, Cambodian visitors to Ho Chi Minh City like to go shopping at supermarkets and have health checks-up at Cho Ray, Binh Dan and Gia Dinh hospitals. According to local tourism firms, each Cambodian visitor spends an estimated 850-2,000 USD during their visits.

Jumping at the chance, many Vietnamese enterprises have opened their shops in Cambodia. In 2008, over 150 Vietnamese businesses set up companies, representative offices and shops in the country.

However, the Vietnamese Trade Mission to Cambodia said that few Vietnamese businesses build long-term plans to develop this market.

Vietnam is currently the third largest exporter to Cambodia after Thailand and China while Cambodia is the 16th biggest market of Vietnam.

The country plans to raise the trade turnover with Cambodia to 2.45 billion USD by 2010.In 2008, Vietnam earned 1.43 billion USD from exports to Cambodia, a year-on-year increase of 50 percent.

VietNamNet/VNA
Posted by CAAI News Media at 9:52 am