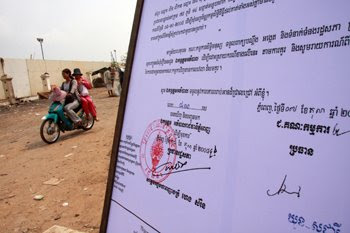 Photo by: SOVANN PHILONG
A poster near the National Assembly calls for the government to recognise the Group 78 community's land rights.
The Phnom Penh Post

RESIDENTS in Tonle Bassac commune's Group 78 community have posted two signs outside the nearby National Assembly building, demanding that City Hall recognise the residents' legal right to the land.

The signs - a Khmer-language original and an English translation - are copies of an October 8 letter from National Assembly President Heng Samrin to Phnom Penh Governor Kep Chuktema, asking that land titles be granted to Group 78 residents.

"Residents of Group 78 filed complaints at the National Assembly on October 6 asking for land titles to be issued for 88 families," Heng Samrin wrote, adding that the assembly would turn the case over to the governor "to solve and report back in appropriate time".

" IF DEVELOPMENT HAPPENS, THE CITY MUST FOLLOW THE LAND LAW TO RESOLVE CONFLICTS. "

"The authorities are quiet. We have legal documents to live here, but the authority does not recognise [them]," he said.

Group 78 is located close to the former communities of Dey Krahorm and Sambok Chap, both evicted forcibly by the government to make way for real estate development projects.

Kheng Soroath said that no private companies had contacted the community about their development plans, but that the Municipality wanted the Group 78 land for the expansion of a road leading over a bridge proposed for the Tonle Bassac.

"If the city wants to develop, we are happy. We need development... [but] if development happens, the city must follow the Land Law to resolve conflicts with affected people," he said.

In exchange for the land at Group 78, City Hall has offered residents $5,000 and a plot of land in Dangkor district's Trapaing Anchanh village, about 20 kilometres from the city - a package residents have turned down.

"The fair solution to move is to give us land which is a similar value to this place," he said.

"What happened at Dey Krahorm is threatening Group 78. We urged authorities not to use violence against people. If the authority uses force, we have nothing with which to fight back."

Phnom Penh Deputy Governor Pa Socheatvong said Thursday that Group 78 was "an old issue" that the city "does not want to comment on again and again".

But Mann Vuthy, a coordinator for the Community Legal Education Centre, confirmed that residents' legal documents entitled them to land titles.

"The National Assembly also agrees that the status of Group 78 residents allows them to get land titles, [so] the authorities should take action."