CAMBODIA: The high price of jealousy 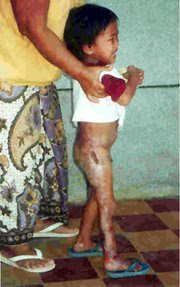 Photo: William Grut/Rose Charities
Many children also suffer when some of the acid thrown towards an adult accidently drops on them

PHNOM PENH, 26 March 2009 (IRIN) - Sreygao is house-bound, her life destroyed after a jealous wife doused her face and neck with acid. It burned into her skin and blinded her.

“Everything has been taken from me because someone was very jealous,” she told IRIN.

Before the attack, Sreygao worked as a hostess at a karaoke parlor. Every night over beer, she flirted with and sometimes solicited sex to wealthy men, prompting an angry wife to take revenge on the 19-year-old.

“I have no face, no job, and I will suffer forever,” she said.

“Whether male or female, jealousy is jealousy,” he told IRIN. “It's not a question so much for gender discussions but rather why it's so prevalent and how it can be reduced.”

Cambodia's pattern of gender blindness marks it out from Pakistan, India, and Malaysia, where it is usually the men who use acid on women for punishment or reasons of honour.

Between 1999 and 2002, the Cambodian League for the Promotion and Defense of Human Rights (LICADHO) documented 44 cases in local newspapers – the most thorough research to date, as no government body or NGO compiles data on acid attacks.

An attack occurs every 25 days, the group said in its report. But Jason Barber, a human rights consultant for LICADHO, told a radio station that the real number of attacks remained unknown since many went unreported.

Grut said the numbers available correlated with more populated areas, such as the capital, Phnom Penh, and smaller cities in Kandal and Kampong Cham.

Manifestation
I have no face, no job, and I will suffer forever.

Tertiary conflict injury is a mindset in war-torn countries that problems can only be solved with violence, with beatings and acid attacks commonplace.

For decades, Cambodia has experienced coups, civil wars and a genocide in 1975-1979 that killed two million people.

“Cambodian history has regularly been very stressful for the [ordinary] person,” he told IRIN.

“This is not the same as PTSD [post-traumatic stress disorder], though arguably it may be a sort of long-term manifestation of it,” he said.

Corrective surgery is out of reach for most Cambodians, with 35 percent of the population living on less than US$1 a day, according to government statistics, so most sufferers must rely on emergency services from NGOs.

“Clearly in Cambodia, facilities are far more limited than in western countries, where one would have a long series of repetitive operations gradually working things back, reconstructing, and grafting,” Grut explained. “It would all be accompanied by very close counselling and peer assistance.”

But first, more attention needs to be paid to acid attacks as they are usually not a priority for local NGOs and government agencies, he added.

“There's not enough recognition at the NGO level, but at the street level there is,” he said. “People tend to know about acid attacks as the word goes around.”
Posted by CAAI News Media at 7:30 am