Koupreys made to look small 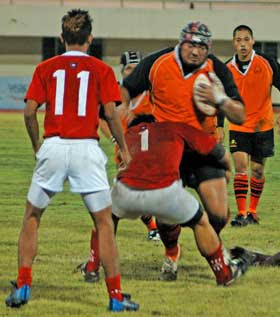 The Cambodian national rugby team were outsized and outclassed Wednesday by Brunei, who won comfortably 21-10 in Savannakhet, Laos.

Brunei exploited its size advantage in the forwards and scored on two interceptions as it defeated the Cambodian Koupreys, 21-10 Wednesday night at Savannakhet National Stadium in the HSBC Asian 5 Nations Southeast Asia Regional Tournament.

It was a satisfying victory for the Brunei side, as it rebounded from a 28-8 defeat at the hands of Laos in its tournament opener Sunday night.

It also marked the first victory for Brunei in the HSBC Asian 5 Nations Series' second year of competition, after being drubbed last year by Guam 76-0 and the Philippines 101-0.

"I'm so happy for our boys to finish up here with a win," enthused Brunei coach Steve Pyrgos. "Our game plan all along was to work through our big forwards to move down the field and wear [Cambodia] down."

For the Koupreys, it was another disappointing performance as they were again plagued by costly penalties and inconsistent play from their backs.

"It was same thing, just like last year," said disappointed Kouprey captain Pich Ratana. "Except for the last few minutes of the match, we couldn't do anything with our running."

"We didn't get a good push in the scrums and we were going backwards much of the time," he said. "I know Brunei was bigger, but we've beaten a lot of bigger teams in the scrums before. That should not have been a problem [Wednesday] tonight. I don't know what happened."

Both sides played each other evenly through most of the penalty filled first half, which saw three Kouprey players - wing Bros Sophorn, centre Francois Bleriot, and Chey Sophal - yellow carded.

Brunei finally broke through in the 38th minute, as fullback Petrus Tuan darted in front of a startled Kouprey flyhalf Chan Samedi to make an interception, and then sprinted 70 metres untouched for the try. Scrum half Richard Chu made good on the conversion, giving Brunei a 7-0 lead at the intermission.

The Koupreys answered back in the opening minutes of the second half as fullback Nheb Rotha fielded a kick and raced in for the try from 80 metres. But halfback Pich Ratana missed the conversion to allow Brunei to keep a two-point advantage.

The Koupreys were unable to muster a consistent running attack during the second period, and Brunei started to keep the ball in close among the forwards, winning the set pieces and slowly wearing down the smaller Koupreys.

With 15 minutes to go, Brunei began an impressive scoring drive from the 50-metre line, using eight phases of hit ups and pick-and-goes by its front five to move swiftly down the field. The drive culminated with flanker Faez Anuar rumbling in to score from five metres out and Tuan's successful conversion kick extended the Brunei lead to 14-5.

However, the match was far from over as the Kouprey backs, who up to that point had been effectively shut down by the Brunei defence, finally found some gaps to run. In the 75th minute, Chan Samedi took a pass off a ruck from ten metres out to score a try and narrow the gap to four points. Pich Ratana missed on his second conversion of the night, and the score remained 14-10.

Brunei kept its poise after the ensuing kickoff and maintained the pressure, pinning the Koupreys inside their ten-metre line. Brunei victory was confirmed with a minute of regulation time to go when Brunei prop Shafiee Matali intercepted a pass by Kouprey flanker Ut Vuthy and ran in for score from five metres out. Tuan's final conversion of the night capped the scoring at the final whistle.

Kouprey coach Peter Maley felt his team suffered from a lack of consistent play and focus.

"Our backs looked like they weren't running on all cylinders, and our forwards, who usually play well, looked out of synch in the scrums," stated Maley.

"Brunei played well and had a good game plan, but we also beat ourselves with penalties, dropped balls, and missed passes."

Despite the disappointing loss, Maley praised the play of a number of his younger players, in particular, Nheb Rotha.

"Rotha looked a little shaky in the opening minutes. I think he was a bit nervous, this being his first international and all. But I think he settled down and played very well in the second half, especially after he scored that try."

Cambodia next plays host Laos Saturday night in the final match of the tournament and Maley hopes his players will focus on the challenge ahead.

"Laos beat us both times last year, and they are constantly improving. We are going to have to be at our best on Saturday to win."

Kickoff for Saturday's match at Savannakhet National Stadium is slated for 8pm.
Posted by CAAI News Media at 11:18 pm