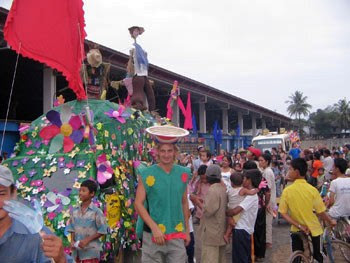 M'LOP Tapang is to hold its annual art parade, Khmarnival, along the streets of Sihanoukville at the weekend to raise awareness of HIV/Aids in Cambodia.

Mlop Tapang, the organisation behind the parade, is an NGO that helps street youth, drug users and orphans who are unable to attend school.

The series of parades, which start tonight, will run for three days and feature seven Khmer-style floats out of which condoms will be distributed to participants and onlookers.

Last year's parade was the fourth consecutive Khmarnival event in Cambodia and attracted a crowd of about 3,000 people over a three-day period, said Vanry Meth, one of the event organisers.

"I want to tell the community not to forget about HIV/Aids. It follows us all the time.... We may see a beautiful girl walking down the street, but hidden behind her could be many skulls," Vanry Meth added.

M'Lop, meaning "to shade" or "to protect", and tapang, the umbrella trees that line the province's beaches, was first established to specifically aid children finding refuge under Sihanoukville's tapang trees.

Today, the main aim of the organization is to bring the region's youth together to teach them vocational skills such as machine repair, tailoring, crafts and electronics.

In addition, M'Lop Tapang urges youth to be smart about HIV/Aids and focuses particularly on those who have had no education.

With a number of new Khmer-themed floats planned for this year's parade, the organisers are expecting an increase in attendance from previous years.

Khmarnival will kick off today with a street parade around Little Market, and live shows starting at 5pm at the Sihanoukville Boys Vocational Centre.

THE IDEA that AMBUSH cures AIDS
is being proven by the more than 400 individuals who have taken a dose of 60 ml three times daily for 21 days. The result is that AMBUSH 'KILLS' the virus by causing the protein envelope to rupture and the viral particles are discarded by the white blood cells. AMBUSH is able to 'KILL' the virus that are 'hiding' in the lymph system by its 'natural radioactive' properties. This process allows the body to 'return to normal health' with a corresponding immunity to that or those strains of the virus.

What is AMBUSH ?
AMBUSH is a radioactive isotope of uranium that is found in the 'palm' plant of which there are more than 3000 species. When ingested, AMBUSH causes the body temperature in the trunk area to rise to about 102 degrees when the individual is sleeping. The preparation takes four hours per batch, which is then given to the individuals for consumption 60 ml three times daily for 21 days. AMBUSH is a herbal preparation in this form but it contains an active ingredient which is a 'NEW' crystalline substance, a drug from the 'palm plant' similarly to ASPIRIN originating from the willow tree bark

RESULTS:
After 21 days on AMBUSH, ALL the individuals experienced a decrease in viral load to undetectable, an increase in cd4, increase in RBC, an improvement in general health such as more color to the face, decrease in Buffalo hump, an increase in gluteal muscles, a decrease to having no joint pains whereby individuals can bend to touch their toes, and walk up steps are but a few examples. There is also a dramatic increase in their sexual appetite beginning after the first week of therapy

DISCUSSION:
In any plant concoction such as percolated 'tea', there are 30-40,000 compounds, whi ch would take the scientific community twenty years to isolate one particular ingredient if they knew what they were looking for. The LORD GOD has given me seven steps to isolate the active ingredient, which is soft and metallic in nature and has a carbon- uranium-sulfur-(classified)-phentolamine configuration or structure. This is similar to Federick Kekule and the discovery of the benzene ring where he dreamt the structure.

As an antiviral and 'natural radioactivity' producing agent, AMBUSH is also effective against leukemia, lupus and HPV. Here I am saying that I have 'GIVEN' AMBUSH in the same 'strength' and dosage to patients with leukemia, lupus and HPV. A 35 year old male with HIV found it difficult to impossible to urinate was put on 'green tea' and water while the doctors contemplated prostrate surgery. One of the doctors gave him my number , I sent him a supply of AMBUSH an d he has not been given any more ARV's, since taking AMBUSH 18 months ago, is in 'good' health and has expressed a willingness to be examined by HIV investigators like many others who have taken AMBUSH.

I have sent this 'IDEA' to most HIV research agencies, scientist of the field, universities, hospitals, clinics, politicians and news agencies to which it is REJECTED because the name of THE LORD GOD is mentioned. He has steered me scientifically through the processes such as which plant and how to produce the active ingredient. What are the odds of a Florida Pharmacist picking a plant would contain the CURE for HIV/AIDS ?
I have never charged any of the people for their supply of AMBUSH but a life saving has been spent on the project with NO renumeration from any sources because AMBUSH falls outside the walls of modern medicine and research.

My proposal is that I PROVE that AMBUSH CURES HIV/AIDS by giving it to a number of END-STAGE or DRUG-RESISTANT people and the scientific community watches their recovery. This proposal addresses the problem in that I have already outlaid the results to be obtained.

This IDEA is unconventional in that the scientific community has rejected AMBUSH because I say it is GOD given. Secondly if I wrote it according to certain standards, then it might be peer reviewed. However, THE LORD GOD has also shown me that there are five enzyme systems associated with the virus, reverse transcriptase, protease, fusion and two more of which causes the virus to be AIRBOURNE. This means that without DIVINE intervention mankind and ALL warm- blooded mammals will be extinct in a number of years.

The PROOF of what I am saying is found in scientific papers wherein it is found that when the protease cuts the viral strands, it cuts it at DIFFERENT lengths EVERY time, to which it should always be a valine at the end but is a different amino acid every time. This is why it is IMPOSSIBLE to produce a VACCINE.

Since this is NOT a hypothesis but there are about 400 individuals who have taken AMBUSH, here lies a vast area in which to check, recheck and confirm that AMBUSH CURES AIDS. Let it be mentioned that during the HIV reproductive cycle, reverse transcriptase converts viral RNA into DNA compatible to human genetic materials. Thus the human DNA has been 'hijacked' and since each person has a DIFFERENT DNA, then the new viral copy is unique to that person which shows that each individual has a DIFFERENT STRAIN of the virus. Consider two HIV positive people swapping viral strains and increasing its complexity with multiple partners.
It can also be proposed that they be revisited as proof that the strain or strains that they had were 'killed' at the time of taking AMBUSH considering that a person can catch as many different strains as there are people who are infected by HIV.
I am also willing to work with the scientific community in identifying those individuals who took AMBUSH and wish to be identified with this process notwithstanding that some are stigmatized while others are jubilant,

Once AMBUSH is verified as being able to accomplish that which is aforementioned then the next stage might be the natural and artificial synthesis of the substance.

Finally, if this is accepted or not, believed or not, THE LORD GOD always wins and this is the heavenly truth to which AMBUSH was divinely given to mankind for the CURE of HIV/AIDS and it will be here forever. Apostle Shada Mishe.