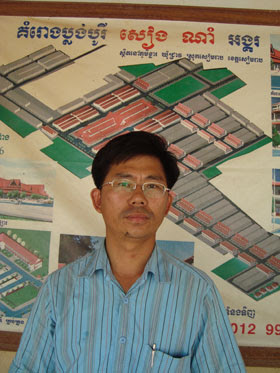 Investors are snapping up properties, those involved with the development say, despite global crisis.

CONSTRUCTION of Siem Reap's Borey Sieng Nam satellite city, about five kilometres southeast of the town centre, is nearing completion and investors are snapping up property, one of its designers said.

Meng Heang, an architect involved in the project, told the Post that 90 percent of the area has been sold to eager buyers who predict it will turn into a hotspot as the population of Siem Reap climbs.

Construction on the 52 hectares of land began three years ago, after it was subdivided by Siem Reap politician Sieng Nam. Meng Heang said that 60 percent of the housing is now complete, but because the new landowners are working to their own timetables, he couldn't provide an exact completion date.

The satellite city will contain housing, two markets, hotels, restaurants, guesthouses and a large quantity of office space. Lim Sophy, an executive at Cambodia Angkor Real Estate, said that the district will be less Westernised than Siem Reap town.

"The markets and businesses will be local, rather than European," he told the Post, adding that the area will likely appeal to Asian tourists.

"I could see a lot of the government departments moving down there," he said. "It's not too far from town. The office space there would suit organisations that don't rely on walk-in customers."

As the population of Siem Reap grows, so does the pressure to expand the town boundaries. But the expansion prospects of Siem Reap are limited by geographical factors.

"The constraint on developing Siem Reap is it's squeezed between the agricultural park on the north side and the lake and the floodplain on the south," Coleman explained.

"So it can really only expand east to west. Borey Sieng Nam was started with the thinking being that it was the most likely area for the town's expansion."

Lim Sophy said that while the global economic turbulence might affect the value of Borey Sieng Nam properties, he thinks the district will still ultimately be successful. Even if it takes a long time for businesses to run effectively, they will be very well placed as Siem Reap grows, he said.

Khun Chea, at Cambodia Angkor Real Estate, said that Borey Sieng Nam is filling up with multi-use properties that could be used for a combination of office space, shop front and living space, similar to buildings on Sivutha Boulevard.