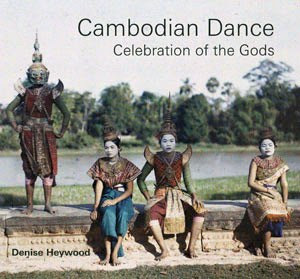 Cambodian Dance: Celebration of the Gods outlines the history and revival of the Kingdom’s traditional dance

WITH the global notoriety of the relatively recent Khmer Rouge atrocities, dance does not immediately spring to the fore in public images of Cambodia. And yet, author and journalist Denise Heywood describes traditional Khmer dance as an "embodiment" of the country's past. As Heywood explains, "The story of Cambodian dance is ... in fact, the story of Cambodia. Every chapter in Cambodian history includes dance."

Heywood's most recent publication, Cambodian Dance: A Celebration of the Gods, explores the many phases of this variegated history through the prism of one of the country's oldest artforms. A lavishly illustrated 144-page work, the book is described by Heywood as a "labour of love".

Despite her tangible passion for the topic, dance was far from Heywood's mind when she first decided to visit Cambodia. Arriving during the initial stages of UN peacekeeping operations in 1993, Heywood initially came to the country as a traveller and a journalist.

It was the graceful spectacle of Cambodian dance that lured Heywood to remain here and dedicate herself to the study of the tradition.

"The very first time I saw Cambodian dance was children performing at the foot of Angkor Wat. I just fell in love with it," she said.

In contrast to this idyllic scene, however, it was the brutalities suffered by classical dancers under the modern Pol Pot regime that most inspired Heywood's fascination.

"I love dance generally, but I was most touched by the plight of Khmer dancers," she said. "I just found their story so moving and so heroic."

Dance in Cambodia had historically been the domain of royalty, with dancers serving functions of entertainment, worship and diplomacy in the nation's courts for over a millennium. As a result, dance became an emblem of the Cambodian monarchy, and subsequently under the Khmer Rouge, of all that was abhorrent and outlawed.

Like others from artistic and educated classes, dancers were singled out by the regime and transported to rural camps or the killing fields, where 90 percent of them were slaughtered.

An epic task awaited those who survived. As Heywood describes, "The remaining dancers walked barefoot and starving back to Phnom Penh, where they attempted to restore together their art."

Piecing together tradition
Classical dance has historically existed only in the minds and bodies of performers.

"Expertise was handed down through the generations from master to pupil and never documented in written form," Heywood said.

With the lives lost to the Khmer Rouge then, so too, whole swaths of knowledge and skill became irrecoverable.
Yet, through their combined knowledge and reference to the Ramayana tradition from which Cambodian dance arose, survivors were able to gradually piece together much of what was destroyed.

The commitment of survivors to restoring their craft mitigated this loss, as dancers continued to practise and pass on the art to a new generation of Cambodians in refugee camps in Thailand.

So too, a renascent Khmer dance has received modest sponsorship from international aid organisations and NGOs. The art has been embraced both within Cambodian and internationally, with the Royal Ballet of Cambodia added to Unesco's 2004 list of Masterpieces of the Oral and Intangible Heritage of Humanity.

Like the performers in classical dances who emerge from temples as living incarnations of the gods, so too Khmer dance has re-emerged as an embodiment of national culture.

It is the original spiritual function of the art that holds most appeal for Heywood and informs the title of her book.
"Cambodian dance is ... first and foremost ... a sacred art-form. It originated in the ancient temples and is tied up with cosmic symbolism." So too, this mysticism has bound Heywood to Cambodia since her initial visit. "I came here by chance, although I always say it was my destiny," she said.

Denise Heywood will present a talk on the content of her book today at 7pm at Monument Books.
Posted by CAAI News Media at 11:22 pm

Thanks for sharing your thoughts on minaret. Regards

Here is my page ... jamalax.Org