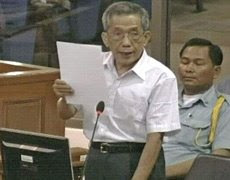 The Khmer Rouge's torture prison boss today stood up in court to apologise for his actions during Pol Pot's regime.

Survivors, victims families and other Cambodians who lost loved ones under the regime sat in deathly silence as Kaing Guek Eav, or Duch, addressed the Khmer Rouge Tribunal on which New Zealand's Dame Silvia Cartwright is one of five judges hearing the case.

Cambodians living in New Zealand lost relatives at Tuol Sleng or S21 prison where an estimated 17,000 people were detained, tortured and then executed.

Duch told the court he accepted responsibility for his actions and wanted to offer an "heartfelt" apology.

"I would like you to please leave an open window for me to seek forgiveness... when I recall the past I am very shocked."

However Duch emphasised that he was acting on orders and disagreed that it was his decision to order arrests and executions. He claimed he was a scapegoat and admitted having had only minimal involvement in torture.

Duch said he put his own interests first.

"I regarded the lives of my own family (more) than those who were detained at S21."

New Zealander Kerry Hamill, brother of rower Rob Hamill, ended up at S21 when the yacht he and friends were sailing strayed into Cambodian waters in August 1978. One crewman, Canadian Stuart Glass, was shot while Mr Hamill and Briton John Dewhirst were taken for interrogation.

Mr Hamill wrote a 4000 word confession about involvement with the CIA, a typical story for many of the thousands incarcerated then executed.

Rob Hamill told NZPA it was good that Duch admitted what he did was wrong.

"Which is a far cry from what the other four accused are saying at this time. I accept his confession but am reminded of the considerable evidence suggesting that he took pleasure from his work."

"It should be noted that he didn't get that job by accident. It wasn't as if he just turned up one day and started butchering people for a living. He worked himself into the position and proved to the other Khmer Rouge leaders that he was an effective and clinical murderer."

Hamill said Duch may have followed orders; "but it seems he went over and above the call of duty".

"Did he ever consider the people he murdered that they, like him, had mothers, fathers, sisters, brothers, or children?"

The Khmer Rouge regime oversaw the deaths of 1.7 million Cambodians. The trial is the first of its senior leaders to be heard before the UN-backed dual international Cambodian Court.

Hamill hoped the Khmer Rouge leaders being tried would get appropriate sentences and believed the trial process was vital if Cambodia was to grow peacefully.

"I would like to emphasise that I am not seeking revenge. I want justice and the truth."

One truth the family would like more than any; "I would like him to tell me where my brother's remains are."

About 10 westerners were held at Tuol Sleng and later executed. The court was told yesterday of two incidents when five foreigners were burned in the streets of Phnom Penh, but the main evidence about the burnings is yet to be presented.

Duch faces charges including crimes against humanity, breaches of the Geneva Convention and violations of the Cambodian penal code including premeditated murder.

*Maggie Tait travelled to Cambodia with the assistance of the Asia New Zealand Foundation.
The hearing continues.
- NZPA
Posted by CAAI News Media at 9:20 am