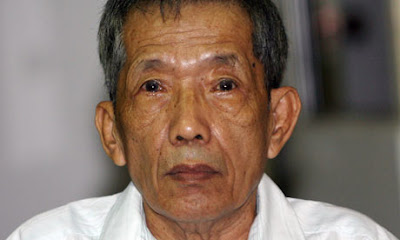 Kaing Guek Eav alias Duch, former chief of the S-21 prison, in the courtroom at the Extraordinary Chambers in the Courts of Cambodia in Phnom Penh. Photograph: Mak Remissa /EPA

The first Khmer Rouge leader to be tried for genocide apologised in court today for the deaths of more than 14,000 people who were murdered at the Cambodian prison camp he ran under the brutal ultra-Maoist regime.

Kaing Guek Eav – better known as Comrade Duch – was Pol Pot's chief torturer and presided over the slaughter at the notorious Tuol Sleng, or S-21, prison.

The former maths teacher turned born-again Christian is on trial for crimes against humanity and war crimes.

"I am responsible for the crimes committed at S-21, especially the torture and execution of the people there," Duch told the UN-backed tribunal this morning.

"May I be permitted to apologise to the survivors of the regime and families of the victims who had loved ones who died brutally at S-21. I would like you to forgive me," Duch told the panel of five judges as survivors of the Khmer Rouge looked on from the public gallery.

Although the 66-year-old said he wished to express "regret and my heartfelt sorrow for all the crimes committed" during the 1975-79 reign of terror in which 1.7 million people died in Cambodia, he claimed he had only been following orders.

He said he had only obeyed the commands because he feared his family would face reprisals if he refused to comply.

"I am solely responsible for this crime, but I am just a scapegoat – a person who played a role in the killings," he told the court on the second day of his formal trial.

Duch has been variously described by those who knew him as "very gentle and kind" and a "monster".

In an indictment in August the tribunal said: "Duch necessarily decided how long a prisoner would live, since he ordered their execution based on a personal determination of whether a prisoner had fully confessed" to being an enemy of the regime.

In one mass execution, he gave his men a "kill them all" order to dispose of a group of prisoners. On another list of 29 prisoners, he told his henchmen to "interrogate four persons, kill the rest".

After the fall of the Khmer Rouge, Duch disappeared for two decades, living under two other names and as a converted Christian before he was located in north-west Cambodia by a British journalist in 1999.

Taken to the scene of his alleged crimes last year, he wept and told some of his former victims: "I ask for your forgiveness. I know that you cannot forgive me, but I ask you to leave me the hope that you might."

His defence lawyer, Francois Roux, said today that his client had been in detention for nine years, nine months and seven days, adding: "This situation is unacceptable."

Duch is expected to be a key witness in the future trials of those also deemed "most responsible" by the tribunal for one of the most grotesque chapters in the 20th century.

The other four – "Brother Number Two" Nuon Chea; the regime's ex-president, Khieu Samphan; and Ieng Sary, its foreign minister and his wife – have denied knowledge of any atrocities.

If convicted, the five face a minimum of five years and a maximum of life in prison.
Posted by CAAI News Media at 12:01 am