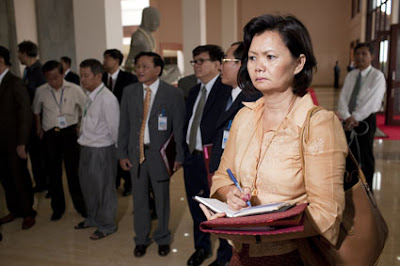 In a speech he gave on Wednesday April 29th in Phnom Penh, Cambodia’s prime Minister presented himself as a victim in the case pitting him against Mu Sochua, the Sam Rainsy Party MP, who lodged a complaint against him on grounds of defamation and insults. Hun Sen particularly reminded his opponent that having her parliamentary immunity lifted would be easy, since a majority of MPs are affiliated to the Cambodian People’s Party and therefore agree with the cause of the head of the executive power. Several organisations from the Cambodian civil society reacted strongly and condemned pressure and threats coming from the ruling power against the opposition.

“I am a simple victim and only wish to defend myself before the Law and find justice”, the Cambodian prime Minister declared loud and clear before an audience composed of brand new graduates. Hun Sen said he did “not despise any woman at all” and said he did not attack Mu Sochua directly. The words he said in Kampot at the beginning of April about a woman behaving in a “provocative way”, who “lunged towards a man to kiss him, so much so that the buttons [of her blouse] popped out”, were not about the SRP MP at all, he said…

The prime Minister insisted on justifying the fact that he filed a lawsuit in turn, against the opposition MP. “On Thursday [April 23], she held a press conference [on that case]. Therefore, I have enough evidence. I signed on Friday [April 24] a complaint [against her] for defamation before the start of the judicial proceedings [launched by Mu Sochua against Hun Sen]”, he declared, adding that his complaint was also aimed at Mu Sochua’s lawyer, Kong Sam Onn, who was with his client at her press conference. The prime Minister is asking each of the concerned persons for a compensation of ten million riels (2,500 USD). He announced he would give the money to charity in favour of orphans.

Hun Sen also said that if justice asked for the suspension of his own parliamentary immunity, he would be ready to accept it, and pointed out that such a procedure against him had few chances of succeeding. “I do not believe that MPs for the Cambodian People’s Party [CPP, going strong with 90 seats out of 123 in the National Assembly] will vote, by a show of hands, the suspension of my immunity. Like for Lok Chumteav Men Sam On [deputy prime Minister, CPP], they will not do it”, Hun Sen bet with confidence. However, Cambodia’s “strongman” did not fail to mention that if justice issued a similar request against Mu Sochua, having it approved would be easy, since the votes of almost two thirds are already secured.

Several Cambodian organisations for the defence of Human rights and the observation of political life reacted strongly, even before this very speech given by the head of government, to the threat to lift the Sam Rainsy Party (SRP) deputy’s parliamentary immunity.

“To issue arbitrary threats on the suspension of Mu Sochua’s parliamentary immunity without any evidence she may have committed any crime is a flagrant act of intimidation against an opposition MP”, president of the Cambodian Centre for Human Rights (CCHR) Ou Virak said in a communiqué dated April 29th and co-signed by nine local organisations. “This clearly aims at reducing her to silence and deterring her from claiming her legitimate right to file a lawsuit for defamation.”

For Kek Galabru, the president of the NGO for the defence of Human rights in Cambodia LICADHO, this “threat against Mu Sochua is yet another example of the dangerous milieu opposition MPs are faced with in Cambodia”. “MPs from all parties should be free to exercise their profession, to represent the interest of their voters and to express themselves in public without the fear of being arrested or detained arbitrarily”, she said, while Yeng Virak, director of the Community Legal Education Centre (CLEC) stressed that parliamentary immunity was “not something that can be lifted randomly by representatives of the government”.

“If Mu Sochua’s parliamentary immunity is lifted, this will simply prove that what she aims at showing is right: that opposition MPs are not free to do their job without fearing intimidation or persecution”, says Koul Panha, director of the Committee for Free and Fair Elections in Cambodia (COMFREL). For her part, Thida Khus, executive director of the Silaka organisation, deplores a “threat that is [...] sad in many ways [...] against one of the rare active female politicians, in a country where women’s voices are frequently silenced or ignored”.

Reached by Ka-set, SRP MP for Kampot Mu Sochua simply indicated that she intended to leave justice to sort that case and that she would accept the eventual suspension of her parliamentary immunity, should judicial authorities decide to lift it. “I trust the will of MPs, of all the parties and I shall respect their decision”, she said. Her lawyer Kong Sam Onn explained that he only acted as he felt he should, as a lawyer, and denied having said any defamatory words about the Cambodian prime Minister.
Posted by CAAI News Media at 11:58 pm

Hi there to all, because I am truly keen of reading this website's post to be updated daily. It carries good data.

Wow, this paragraph is fastidious, my sister is analyzing these kinds of
things, so I am going to let know her.

Feel free to surf to my page: increase penis size